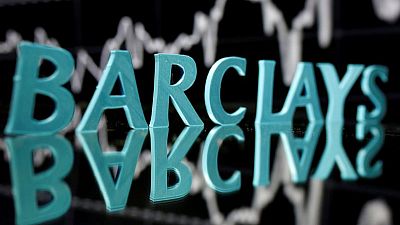 LONDON/PARIS (Reuters) – Barclays and BNP Paribas reported bumper first-quarter profits on Friday, as an equities trading boom offset a slump in demand for fixed income products, showing the value of having a broad-based banking business.

BNP Paribas shares fell 1%, while Barclays shares fell 5% as analysts noted its rising costs, which the bank said was partly due to paying traders more for their strong performance.

Both Barclays and BNP benefited from lower than expected charges for bad loans, as government support measures in their domestic economies helped to defer the economic pain from the COVID-19 pandemic.

Barclays took an impairment charge of just 55 million pounds compared with 2.1 billion pounds in the same period a year ago, while BNP Paribas said its similar measure fell 37% to 896 million euros.

Barclays’ approach contrasted however with bullish moves by rivals such as HSBC and Lloyds to release big chunks of provisions set aside for potential soured loans.

European banks have generally been more cautious on provisioning for bad loans than U.S. peers such as JPMorgan, which earlier this month released more than $5 billion.

The bumper equities performances from the two banks partly made up for thin returns from fixed income, currencies and commodities (FICC), where client demand slumped.

Barclays reported a 35% decline in FICC income, while at BNP Paribas it fell 16% as interest rate and foreign exchange-related products in particular fell out of favour.

“We would have liked to do better than we did on FICC, we take a prudent approach to risk,” Barclays CEO Jes Staley told reporters.

Rival banks which have already published first-quarter earnings seemed to dodge the fixed income decline, with Deutsche Bank’s fixed-income and currency sales revenue increasing 34% while Goldman Sachs reported a 31% rise in such trading.

For Barclays and BNP Paribas, the equities trading boom coincided with a flood of corporate listings in Europe. The turnaround in equities was timely for BNP Paribas in particular, after earnings in the first quarter a year ago were wiped out by losses related to dividend-linked derivatives as European companies suspended payouts.

The listing bonanza bolstered Barclays’ banking advisory business within its investment bank, as income rose 35% to 859 million pounds from fees for advising on equity fundraisings.

The generally strong performance in the past few years from Barclays’ investment bank has vindicated Staley’s backing of the business, during a period when activist shareholder Ed Bramson urged him to cut it back.

(Reporting By Lawrence White and Iain Withers in London and Matthiue Protard in Paris, additional reporting by Marc Angrand in Paris, editing by Anna Irrera, Rachel Armstrong and Jane Merriman)