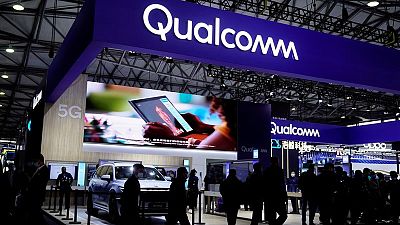 By Stephen Nellis and Chavi Mehta

Qualcomm shares rose 6% after the results were released.

That has helped its shares rise 83% over the past year, beating the Nasdaq Composite Index’s 64% gain, as investors bet Qualcomm will be a big winner in the global shift toward 5G telecommunications networks.

For the fiscal second quarter ended March 28, Qualcomm had adjusted earnings of $1.90 per share on sales of $7.93 billion, compared with analysts’ estimates of $1.67 per share on $7.62 billion, Refinitiv data showed. Wall Street estimates had been only slightly above the midpoints of Qualcomm’s own guidance of $1.65 per share on $7.6 billion.

Qualcomm executives said the company is investing with its manufacturing partners to secure capacity, “one of the key drivers of growth of expenses between the second and third fiscal quarter,” Qualcomm Chief Financial Officer Akash Palkhiwala told Reuters.

Qualcomm has been aiming to gain smartphone chip market share after U.S. sanctions on Huawei Technologies Co Ltd last year all but cut off the Chinese company’s chip supplies, rendering it unable to keep making smartphones. Qualcomm executives have said they expect much of Huawei’s previous market share to migrate to other Android phone makers which use Qualcomm’s chips.

Qualcomm sees the vacuum left by Huawei as “a tremendous opportunity in gaining market share, not just for the short term into fiscal 2022, but also for the longer term and beyond that,” added Palkhiwala.

Those gains hinge on Qualcomm’s ability to secure enough chips during a global supply crunch. Cristiano Amon, who will take over as chief executive in the coming months, told Reuters that Qualcomm can source its most profitable chips, the flagship Snapdragon 800 series of smartphone processors, from both Samsung and TSMC.

“We expect supply chain to improve significantly as we get to the end of the calendar year,” Amon said in an interview.

Qualcomm has aimed to grow its chip business and improve margins as its once-lucrative patent licensing business shrinks after some changes to its licensing practices.

For the fiscal third quarter, Qualcomm forecast chip and licensing revenue with a midpoint of $6.05 billion and $1.45 billion, respectively, compared to analysts’ estimates of $5.64 billion and $1.36 billion, according to FactSet data.

For the fiscal second quarter, chip and licensing sales were $6.28 billion and $1.61 billion respectively, versus FactSet expectations of $6.26 billion and $1.35 billion.

Qualcomm said handset chips sales were $4.07 billion, up 53% from a year ago, compared with a 79% gain in the previous fiscal first quarter. Sales of radio frequency chips, which Qualcomm has said will power revenue growth, were up 39% at $903 million, compared to a 157% year-on-year increase.