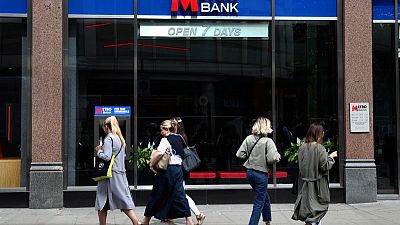 (Reuters) – Metro Bank reported on Wednesday a 17% plunge in lending for the first quarter when the UK was grappling with coronavirus lockdowns, though the British lender said it was starting to see progress across its loan book.

The company’s total net loans fell to 12.05 billion pounds ($16.73 billion) for the first three months of 2020, versus 14.51 billion pounds a year earlier. Deposits jumped 8% to 22.90 billion pounds as stuck-at-home Britons had little reason to spend their money.

“Customer activity dipped in January following the introduction of the third national lockdown late-December, recovering as the quarter progressed and helped by the gradual easing of restrictions in April,” Metro said.

“We are also beginning to see progress across our loan book, with strong growth in consumer lending and specialist mortgages as we focus on assets delivering higher risk-adjusted returns.”

The lender plans to expand its consumer-finance lending tenfold to 2 billion pounds within three years in a bit to drive up margins, Reuters reported earlier this month.

Metro, among the highest profile so-called challenger banks since it launched on high streets in 2010, is trying to turn around its finances after two years of losses and restore investor faith after a major accounting error in January 2019.

It is also dealing with record low interest rates set by the central bank to reinvigorate a pandemic-hit economy, which has led to thinner margins for banks, while bulkier provisions set aside to cover bad loans due to the economic downturn have also eaten into the lender’s profit.

(Reporting by Muvija M in Bengaluru and Iain Withers in London, Editing by Sherry Jacob-Phillips)