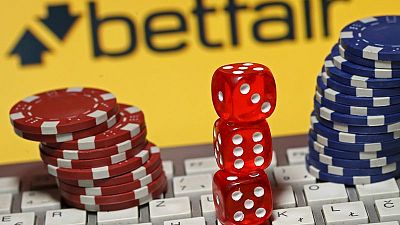 The United States is seen as the next big growth market after a ban on sports betting was lifted in 2018. Flutter grew its revenues there by 135% in the quarter, almost exclusively through the FanDuel business which is a candidate for a partial listing.

At 288 million pounds ($402 million), the U.S. accounted for 20% of quarterly revenues and Flutter now has twice as many average monthly customers there – 1.6 million – as Australia, where its Sportsbet brand is the current market leader.

With its UK and Irish betting shops closed during the first three months of the year due to COVID-19 restrictions, total revenues were driven by a 42% uplift in online revenues.

The Dublin-based group estimated estimate that Flutter brands accounted for 56% of all customers at March’s Cheltenham horse racing festival, one of major sports betting events of the year, with Paddy Power the most downloaded app during the week.

“As restrictions begin to ease and retail reopens across a number of markets, we remain confident that our diversified business leaves us well placed to deliver sustainable growth going forward,” Flutter Chief Executive Peter Jackson said in a statement.