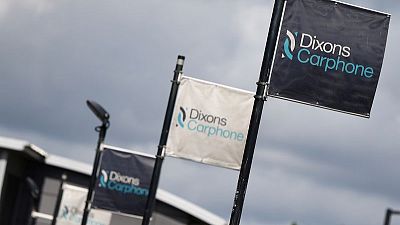 LONDON (Reuters) – British electricals retailer Dixons Carphone said it had repaid 73 million pounds of government support used to furlough workers in the UK and Ireland, after its online sales jumped, offsetting the impact of store closures during lockdowns.

The group, which trades as Currys PC World and Carphone Warehouse in the United Kingdom, also announced plans to close its Dixons Travel business which operates at airports, blaming Britain’s removal of airside tax-free shopping.

It said it did not expect passenger numbers to recover sufficiently to compensate for the removal of tax-free shopping. Dixons Travel had previously made an annual profit contribution of over 20 million pounds ($28 million), the company said.

For the year to the end of April, Dixons Carphone said online sales had more than doubled to over 4.5 billion pounds, with group electrical sales up 12% in the 25 weeks to 24 April.

The uptick in sales came despite most stores in the UK and Ireland being closed for much of the period due to lockdowns, and increased restrictions on trading in the Nordic region. Stores in England and Wales reopened on April 12.

After repaying government support for the furlough paid to staff, Dixons Carphone said it expected full-year adjusted pretax profit to be broadly in line with the consensus forecast of 151 million pounds.

The group stuck to its medium-term guidance. It is due to report its full-year results on June 30.