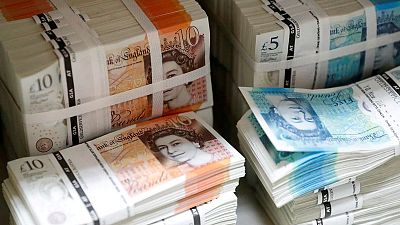 LONDON (Reuters) – The pound rose in early London trading on Thursday, having been boosted overnight after the Fed’s dovish outlook prompted a weaker dollar.

Sterling hit a nine-day high of $1.3979 in Asian trading after the U.S. Federal Reserve said it was too early to consider rolling back its emergency support – a dovish tone which pushed the dollar to nine-week lows.

Investors are watching political developments in Britain, as Prime Minister Boris Johnson is under pressure from a series of accusations about how he responded to the COVID-19 pandemic and who paid for the refurbishment of his flat, as well as an inquiry into leaks of private information from his office.

Britain’s Electoral Commission began an investigation on Wednesday into the refurbishment of Johnson’s Downing Street apartment, saying there were grounds to suspect an offence may have been committed.

“Although also benefiting from the softer USD environment and GBP/USD is very close to the 1.4000 level, political woes are limiting the GBP upside,” ING strategist Petr Krpata wrote in a note to clients, citing the Electoral Commission’s investigation.

“Coupled with the upcoming Scottish elections, all this points to limited near-term upside to GBP,” he added.

Britain holds regional and local elections on May 6, including a vote in Scotland expected to produce a pro-independence majority there. Scotland voted narrowly to remain the United Kingdom in 2014, and most analysts consider another referendum on independence to be unlikely.

“A further modest drop in sterling could follow a majority result for Scottish nationalists. However, while Scottish independence remains a risk to take seriously, the chance that Scotland actually leaves the UK, even in the event of a majority for nationalists on 6 May, remains low.”

“Recent and potential further near-term losses for sterling would thus likely be temporary, in our view. Once the noise eventually quietens down again after the election, sterling can gradually trend higher again as the UK enjoys a robust rebound from the COVID shock,” he said, adding that Berenberg expects cable to reach $1.47 by the end of the year.