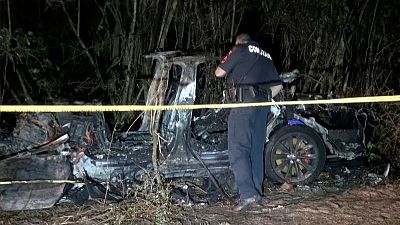 By Hyunjoo Jin and David Shepardson

(Reuters) – The U.S. safety board is working to publish as soon as possible a preliminary report on a recent Tesla vehicle crash in Texas in which local police said no one was in the driver’s seat, a senior official told Reuters, acknowledging public confusion over the fatal accident.

“A preliminary report typically comes out in a month, but we are working hard to get it out as soon as possible because we recognize there is this confusion out there,” Kristin Poland, Deputy Director at National Transportation Safety Board, said in an interview with Reuters.

Earlier this month, a Tesla Model S smashed into a tree in Texas and burst into flames, killing one occupant found in the front passenger seat and the owner in the back seat. Police said it was apparent that there was no one in the driver’s seat at the time of the crash.

On Monday, Tesla refuted police’s claims, saying a deformed steering wheel suggested that someone was likely in the driver’s seat.

“We recognize that that’s not an ideal circumstance,” Poland said, referring to public confusion over what happened during the accident. “The sooner we can get out the preliminary report out the better it will be for everybody to provide as much clarity as possible,” she said, saying the report will be based on solid facts.

She declined to discuss any findings so far, saying that the probe is under way

“We have a very, very experienced investigators that are doing this. It is not like the first time out,” the veteran NTSB official said.

The NTSB has criticized Tesla’s Autopilot after a series of investigations into fatal crashes, including a lack of adequate driver monitoring systems.

The Autopilot system handles some driving tasks such as keeping lanes and maintaining distances between cars, but experts say the term “Autopilot” can be misleading consumers to believe that the car can drive by itself. Tesla says its features “require active driver supervision and do not make the vehicle autonomous.”

(Reporting by Hyunjoo Jin in BERKELEY, California and David Shepardson in WASHINGTON; Editing by Marguerita Choy)