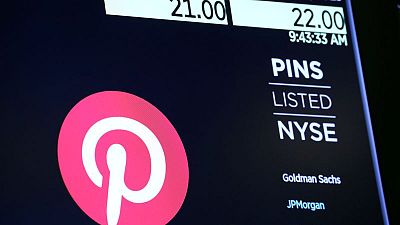 The image-sharing company said it expected revenue to rise 105% in the second quarter, which implies a figure of about $558 million, compared with a Refinitiv IBES estimate of $530 million.

Ad spending has recovered further this year from the slump in the early months of the COVID-19 crisis as an economic recovery picks up steam, prompting retailers to step up efforts to attract customers.

Pinterest has also benefited from a rise in social media use during the pandemic, with the company forecasting a mid-teens jump in global monthly active users in the current quarter.

In the three months to March 31, its monthly active users surged 30% to 478 million.

Pinterest’s revenue, generated by placing advertisements next to users’ Pins or posts, soared 78% to $485 million, beating expectations of $473.7 million.

Net loss narrowed to $22 million, from a loss of $141 million a year earlier.

(Reporting by Nilanjana Basu in Bengaluru; Editing by Aditya Soni)