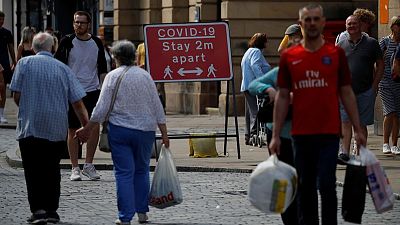 LONDON (Reuters) – British retailers reported the sharpest upturn in sales since 2018 this month as non-essential shops in England and Wales began to reopen after more than three months of closure due to COVID restrictions, a survey showed on Tuesday.

The Confederation of British Industry said its monthly retail sales volume balance jumped to +20 in April from -45 in March, its highest level since September 2018.

Part of the increase reflected the effect of comparing with a year earlier, when Britain was in the midst of its first, most stringent COVID lockdown.

But a separate measure of sales volumes for the time of year also rebounded strongly to its highest since June 2018 and is expected to remain high in May.

However, the CBI said many stores continued to struggle, especially in hard-hit sectors such as clothing.

“Despite progress along the roadmap, the impact of COVID-19 restrictions are still biting hard,” CBI economist Ben Jones said.

“The improvement in retail sales this month was driven by sectors that have performed relatively well during the pandemic, with little immediate rebound expected for more embattled sectors such as clothing, footwear and department stores,” he added.