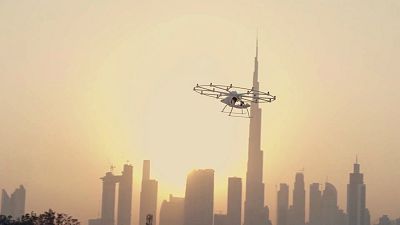 Dubai is continuing to grow as a metropolitan hub and in order to keep the city moving, the infrastructure and public transport network has had to expand.

Set up in 2005, Dubai's Roads and Transport Authority, or RTA, took on the task.

"Dubai is a city of about three million residents, we have about 20 million visitors every year, and our main priority, at least at the RTA is to ensure that these people are able to move in a very safe, obviously, number one, but also a smooth and sustainable manner as one," said Ahmed Bedrosian, CEO, Dubai Public Transport Agency (RTA).

In 15 years, the network has expanded to include the metro and tram systems, buses, water taxis and ride-hailing services, including a fleet of electric cars.

But these won't be the only means of travel in the near future.

The Virgin Hyperloop is an underground transport system which involves pods inside vacuum tubes carrying passengers at high speeds.

Hyperloop made history last month in Las Vegas, Nevada, when the first passengers successfully travelled in a Hyperloop pod.

The multi-million-euro project will reduce travel time for commuters between Dubai and Abu Dhabi from just over an hour to about 12 minutes.

A significant investment in the project has been made by Dubai based DP World, a global provider of smart logistics solutions.

"New technology is really the backbone of our economy today. Electronic government, smart government, the port uses all the kind of technology. And so it's fitting for us.," says Sultan Ahmed bin Sulayem, Chairman Virgin Hyperloop, Chairman and CEO of DP World.

"I'm really happy and proud that we're able to really put two people in a cabin and they levitated and they went after a speed of one hundred seventy-two kilometres per hour in a tunnel which was made purposely."

The future of mobility

The Dubai government formed the Dubai Future Council for Transportation to look at mobility going forward.

"You have to be a risk-taker and to become the first to adopt these kinds of technologies. Of course, it needs to be calculated risk. But at the end of the day, we have proven in the past that we are ready to take risks," says Bedrosian.

"We did, for example, the first trial with an Autonomous Air Taxi, for example, in 2017. That also signifies Dubai's aim to become one of the first cities in the world to have an autonomous air taxi service."

"The other thing is the flexibility. I think we have proven in the past that we are very flexible. Decision making is extremely fast in our city, and therefore we are capable to tweak and change our regulations and policies very quickly compared to other cities in order to be able to adopt these technologies going forward."

The Future Council is aiming to increase the use of public transport and shared mobility and has a target for 25 percent of trips to be made by autonomous modes by 2030.

The Roads and Transport Authority are also testing a variety of modes of self-driving vehicles and autonomous solutions.

In the near future, Dubai plans to implement a new suspended rail system or sky pods to revolutionise travel around the city.

The desire for more environmentally friendly, safe and comfortable modes of transport has been increasing in recent years.

But with the advent of the pandemic, we've seen the popularity of personal modes of transport grow further.

Things like this vehicle, electric scooters and e-bikes have seen their popularity and the demand increased further

Together these form last mile solutions for the public and businesses to make the first and final part of journeys safer and faster.

"When you look at personal transport, so we look at the well, we focus on the first and last mile. So it's that convenience of commuting from scooters. You've got the health side of the e-bikes and then you've got the private mopeds," says Adam Ridgway, the CEO of One Moto.

"The future of mobility in my eyes is convenience and we've got the first and last mile. You want to know that when you walk out of your house, you've got a vehicle that you can use there."

"And then you look at the mid mile with cars. And I do see the shared mobility is going to be a primary focus for the future."

The purpose of the additional mobility is multilevel. It's economically positive. It's better for the environment and safer and will reduce travel times.

"The beauty of Hyperloop is that it connects in minutes. Cities and towns, centres and traffic is a huge problem. Those cities that are expanding and there is a limit to how many highways you could make," says Sultan Ahmed bin Sulayem.

"There's a limit to how many metros you make. Hyperloop is about selling time to people. And the one thing we can't buy in the world is time, and people don't want to be stuck in traffic for hours sometimes.:

"And if they travel from cities which are far, it takes a long time. And that is a solution that Hyperloop will bring."

The way we travel is evolving and changing and Dubai is ready to join the race for the very best modes of transport to keep the city moving.

'People of determination' helped to navigate living in Dubai

Dubai acts to stem the tide of single use plastic