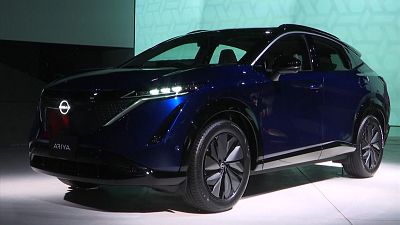 As the UAE opened its doors to tourists, Dubai carefully hosted its first major conference since lockdown.

Titled “Artificial Intelligence Everything” the conference was attended by some heavy hitters from across the region, keen to find out how AI can help companies bounce back post-lockdown.

Euronews asked delegates how their customer landscape had changed and how AI might be used to help it evolve.

CEO of Majid Al Futtaim Retail, Hani Weiss, said over 37,000 of his employees had received special training in AI to ensure they understand its importance.

“Personalisation is helping to improve consumption, reduce time-wasting for our customers and makes sure we help them to choose whatever they want,” Weiss explains.

The conference also addressed the issue of data analytics and inevitable concerns about privacy and security.

Mudassir Sheikha, Co-founder and CEO of vehicle for hire firm Careem said, as a digital-first business, data was among the most important things they have. He said: “Data is sort of the fuel that drives our business.”

Sheikha explained that having the best security team possible, storing data in the cloud and ensuring that effective processes are used to manage data are the key elements Careem focuses on.

Delegates also reflected on how applying AI to their businesses during the pandemic was a crucial decision.

Weiss said there had been a huge surge in orders. Many countries saw an increase of as much as 300 percent and suggested that, in Saudi Arabia, that figure was closer to 1,000 percent.

He said many customers were new to the idea of online ordering.

“28 percent of the customers that tried online during the pandemic, never, ever access any online platform,” he said.

Mudassir Sheikha explained the importance of being ambitious in how they approach the online environment.

Sheikha’s hope is that they become an “offline-online bridge” and create a super app.

As with AI, the pandemic is accelerating the uptake in automation across most sectors. The food and beverage industry is no exception, with demand for burger-flipping, salad-tossing robots on the rise. But there are concerns that this may simply be a fad and that the human touch can never be entirely eliminated from the industry.

The pandemic has fuelled demand for robots with culinary capabilities and although the trend predates Covid 19, some believe they have gone from a novelty to a necessity.

“It's food automation, and it's definitely coming,” argues Rick Wilmer, CEO of the California based firm Chowbotics.

“COVID's going to accelerate it again because people are concerned with human beings being involved with their food and the spread of disease.”

Wilmer believes that people feel safer with robots preparing their food than other humans.

Robotics companies insist they are not trying to replace humans altogether but there are still fears employment will take a hit. But Jamie Richardson, Vice President of the White Castle hamburger chain doesn’t believe it will replace workers.

“We look at it as an empowerment for the team, because it helps us free up our heart for hospitality,” says Richardson.

Although robots have proved useful during the pandemic, some experts doubt whether they can compete with human beings in the food and beverage sector in the long term.

This is certainly a view taken by Max Elder, Research Director at the Institute for the Future. Elder believes there may be a need for fully robotic food outlets in time of emergency but that demand will quickly go away.

"How do they compete with restaurants who are basically becoming these kiosks themselves?” Elder asks.

"When we automate away the act of cooking, preparing, presenting, sharing food, I deeply believe that we lose a lot that's inherent to that meal, to that experience and to what it really means to feed and be fed."

There is a balance to be struck between which parts of the cooking process are automated and those that retain a creative human touch.

July saw TESLA become the world’s most valuable automaker. Its competitors have struggled to keep up with the pace of innovation at the company despite its controversial CEO Elon Musk, volatile share price and its inability to mass-produce some of its most attractive prototypes.

Despite a seven-week shutdown in its US assembly plant, electric car manufacturer Tesla posted a surprising €90m net profit for the second quarter of 2020.

It was the company’s fourth-straight positive quarter and came after it overtook Toyota as the world’s most valuable car maker. But competition for Tesla is looming.

Nissan, among others hope to be hot on Tesla’s heels with their latest electric offerings.

At the launch of its new model, Ariya, Nissan CEO, Makoto Uchida boldly told audiences: “Today, we are introducing a car that's more than a car. Ariya represents a new chapter, a new face, a new language.”

Nissan is certainly keen to turn the page on a year in which it made a loss of around €5.3bn and saw its former CEO Carlos Ghosn go on the run from authorities following allegations of corruption. But Jim Holder, Editorial Director of Autocar Magazine thinks their new electric SUV offers a glimmer of hope for the company.

"I think what we're seeing with the launch of the Nissan Ariya is the next generation of electric car technology coming to the market. Nissan, of course, got in there very early. They were among the pioneers with the Nissan LEAF, but that is now more than a decade ago.”

Nissan does not consider the 10-year delay to be a problem. Development Chief Product Specialist, Makoto Fukuda, says: “We have a huge customer base from LEAF and we could learn a lot of things from LEAF customers.”

Holder acknowledges the huge technologica shift in the motor industry.

“You have to get really excited that electric cars are finally reaching a point where they can match or eclipse in many ways the cars that we've become used to driving over the past hundred or more years.”

Crossover vehicles have made up 40 percent of recent U.S. auto sales. With its similar price tag, Nissan hopes to take a chunk out of Tesla’s 'Model Y' market with the Ariya. Time will tell if their latest electric car spells a new era for the company.