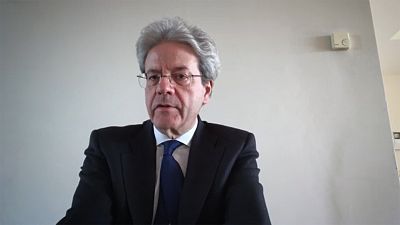 The EU Commissioner for Economy, Paolo Gentiloni told Euronews that member states have already taken measures up to 270 billion euros following the historic decision to suspend the fiscal rules on public debt and deficits and announced a new EU framework to follow to support the workers and people that lose their jobs because of the coronavirus pandemic.

The European Commission suspended its strict rules on public deficits to allow governments to open the money taps to support healthcare systems and economies. With that in mind, is this just a national issue now, for member states to manage on their own?

No, absolutely we need this action to be coordinated and I have to say that coordination is growing both in healthcare side, on borders management to allow medical equipments and trade to continue in the single market and on economy. So for sure what we decided on the Stability and Growth Pact allow member states to take very strong measures and in the last couple of weeks the members of the European Union, took measures of about 270 billion euros and gave guarantees to their companies and banking systems up to 1800 billion. So, first it's expenditure, the second is guarantees. All these efforts should be strongly coordinated in the next weeks and months.

Of course, but is this flexibility given to the member states enough to address issues such as the loss of jobs or the financing of the SME's?

I think it is sufficient for a first immediate reaction what member states thanks to the initiative of the Commission, not only on the Stability and Growth Pact but also on the State Aid rules are doing but for sure for a recovery plan that we strongly need this is not sufficient. We need to identify targets and ways to finance these targets over a general European recovery plan for the months that we have ahead.

Covid-19 Pandemic: How has the EU responded to the economic crisis?