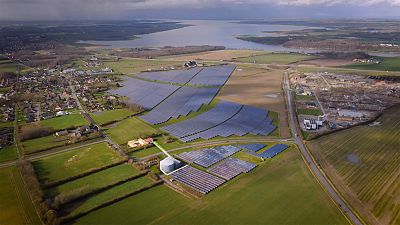 The 17 Sustainable Development Goals set by the UN are described as the blueprint to achieve a more sustainable future for all.

Known as SDGs, they address the global challenges we face, including those related to poverty, inequality, climate change, environmental degradation, peace and justice.

The EU wants to deliver on these challenges by 2030. To do so it will integrate the SDG objectives into what is called the European Semester - an annual review of EU member states fiscal books. They pay special attention to economic and employment questions.

The countries closest to achieving the SDGs in Europe are Denmark, Sweden, Finland, France, Austria, Germany and the Netherlands, but yet none are on track to achieve the goals by 2030.

Meanwhile, Greece, Bulgaria, Romania and Cyprus are at the bottom of the list.

Denmark is a often heralded as a world-leader when it comes to clean energy, sustainability and climate action.

In addition to its goal to make Copenhagen the world's first carbon-neutral capital city, the country has also initiated ProjectZero.

Under the scheme, the city of Sonderborg aims to become the first carbon neutral European city. It hopes to show that the 2030 zero emissions goal is possible, with the active participation of local businesses and the inhabitants.

The project, initiated by the city, brings together funds from the local municipality and Danish energy companies.

Chairman of the board of ProjectZero Hans Lehmann explained why he thinks this project will succeed where others have failed: "Being a public-private partnership ensures that we can work together. Our objective here is to focus on the energy efficiency, how we are actually living, can we reduce our consumption and our emission, can we produce new kind of energies."

One small step for Sonderborg

According to the company monitoring the project's progress of the project, CO2 emissions have been reduced by almost 40%. However, this still leaves 700,000 tons of emissions to be eliminated. A wind farm project that is being assessed would bring this figure down to 400,000 tons by 2025.

A big step, but there is still much to be done.

In 2016, a cooperative of supermarkets joined ProjectZero, betting on a sustainable business plan.

Asger Skov Nielsen, the project associate for the BALS cooperative said: "We invested a lot of money in our lighting and setting up meters. We have a company tracking our consumption on lights, heat, ventilation, all the coolers. In the whole cooperative we invested about 2.2 million Danish crowns, we actually got that back already, so it is really worth it.

However, getting big businesses on board is only half the job.

The battle against climate change begins at home

ProjectZero involves businesses, but also citizens and their homes, which are particularly polluting.

Solutions such as district heating, generated by renewable energies, or photovoltaic cells, are used to reduce household consumption. Social housing associations aim to set an example.

Housing association tenant Jørgen Brodersen said: "There have been many renovation projects going on and we have improved many issues.

"We have saved a lot of money, even though the rent increased a little bit. We have had very good cooperation and the residents are very satisfied with living here."

Sonderborg aims to interconnect sectors that consume energy with those who produce it. For example, two bio-gas plants under construction will transform agricultural, industrial and domestic waste into renewable gas. And public transport runs on biofuel. These steps are encouraging, but significant challenges remain.

According to Lehmann: "We have the money, we have the technologies, the most difficult is that we need to change our lives, focus on being more sustainable on a global scale, and we can be here, an example."

Strategic thinking is the key

Euronews spoke with Denmark's Foreign Minister Jeppe Kofod to ask whether it's realistic to try to turn Europe into Denmark in terms of a green economy and social equality.

Euronews: What are the key political goals and regulations that a country needs to have in order to achieve all these sustainable goals by 2030 in Europe?

Jeppe Kofod: First of all, I think that each and every government has to come up with a very ambitious target for 2030 on climate action, on environment on also social responsibility. Then they need to ask, what tools do we have? They need to have the right regulation in place and they need a partnership with the private sector, with companies and with investors. And for some countries it's painful. They have to phase out, for example, coal, then they need to have a long term plan for that and also that implies retraining people at work. For example, those working in the coal mines or in powerplants.

Euronews: How are we going to bring all this private capital that is needed in order to achieve these goals on board?

Jeppe Kofod: What we have experienced in Denmark and there is no contradiction between the green transition, investing for example in renewable energy and to be competitive and to be attractive to investors. These two things go actually hand in hand if you do it in the right way. Even the years after the peak of the financial crisis where all of the jobs were killed in Europe, the only sector that grew in Denmark was the green energy sector. Because we deliberately wanted to put the framework of that sector. The good story is that if we do it the right way, it can help climate, environment, it can also create jobs, and thereby improve social conditions in each and every member state.

**Euronews:**So you think things can happen in this direction without people losing jobs?

Jeppe Kofod: Jobs that we know today in the fossil fuel sector for example will die. Then we need to create new jobs and the big political thing is how to help people that are employed today in the sector that slowly dies get into a new sector, new jobs. That means retraining lifelong learning, that means investment from the state's side in education. But also how to prepare the coming generations, the young people who are in education right now, to give them the right tools so they can start being innovative in the new green economy. Both things have to happen and it needs to happen now.

Euronews: So you think that the target of reaching these goals by 2030 is realistic?

Jeppe Kofod: It's an enormous challenge. I don't want to underestimate the challenge. Denmark had a big oil in the '70s like many other countries. At that time we said we needed to get out of that dependency and now we got out of it and by 2030 we will be 100% renewable when it comes to electricity. So, if you look at the world today, you have China rising, they need that type of technology... We have India which has risen recently, 1,3 billion people are going to transition. You have Africa, Latin America, they need to have our ideas and technology. So if we grow that sector we will be able to create jobs to Europe.