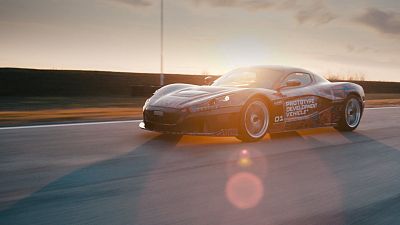 It's not just in Silicon Valley where High-tech Startups are to be found. They're in Croatia, too. Afterall it's here Nikola Tesla started his inventions back in the late 19th century. And businesses today are creating new kinds of robotics, energy management - and the Rimac.

Mate Rimac started his eponymous company in a garage. Now Rimac Automobili, just outside the capital Zagreb, has more than 600 employees - half of them are engineers, designing and building hyper sports cars as fast as a bullet train.

The company has created a high-performing electric car with a top speed of 365kph and a 2 to 2.5 million euro price tag.

Rimac said the company didn't want to just create electric versions of existing cars, but were keen to push it to the next level and try to achieve the impossible.

"So for example, with four motors, one for each wheel, we can turn each wheel separately, 100 times per second," he explains. "It’s a totally new driving experience and a totally different level of performance."

And this is only part of Rimac’s business plan.

Porsche is a shareholder alongside Hyundai and Kia and Rimac Automobili is basically helping these companies develop their future vehicles. It showcases the technologies in its own cars which then trickle down to other manufacturers’ vehicles.

"We want to be leader in electric supercars, leader in electric high performance components for other car manufacturers," says Rimac. "Beyond that, we want to help the next transition in the industry, moving from ownership and driving of the cars to mobility as a service and autonomous driving."

Mate gets some of the company's brainpower from the Faculty of Electrical Engineering and Computing (or FER) at the University of Zagreb, and its Innovation Centre Nikola Tesla, or ICENT.

The centre is working on nearly 200 projects. Nikola Mišković, Vice Dean of FER, says working with a company complements the research done at ICENT.

"We need to be able to transfer it to someone who can raise it to a higher technology readiness level, and then finally to the market," he says. "This is exactly what our Innovation Center Nikola Tesla is used for - to transfer research results to the industry."

PhD students from the centre move into industry, to companies such as Rimac, or Gideon Brothers, which is involved in autonomous driving and robotics for various purposes.

These modern-day inventions show the start-up spirit lives on in the land of Nicola Tesla.

How Dubai is making retirement easier for foreign nationals