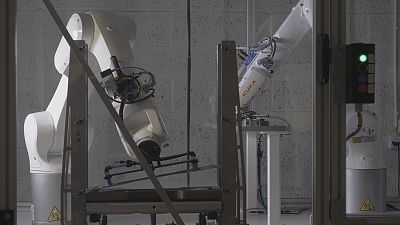 Hydrogen is the most abundant element in the universe and offers the game-changing promise of clean power on a mass scale.

While fuel cell and hydrogen technologies (FCH) have the potential to replace all fossil-based energy, conservative projections estimate FCH will be able to generate 2,250 terawatt hours (TWh) of hydrogen in the European Union by 2050.

That would supply about a quarter of the bloc's total annual energy demand. In other words, an eyewatering amount of energy that could fuel 42 million large cars, 1.7 million trucks, around a quarter of a million buses and more than 5,500 trains.

PowerCell Sweden AB makes fuel cell stacks and systems powered by hydrogen. These can be adapted for use both on and off the road and at sea - for instance in trucks or ships. When combined with so-called green hydrogen, which is produced from renewable sources like wind or solar, this offers the possibility of low-carbon energy.

The firm's founder and vice president, Per Ekdunge, insists the technology is ready to go.

“Yes, [it exists] already now. We just need to scale things up and that's starting to happen. Hydrogen fuel cells will play a significant role if we are to achieve our climate targets.”

In an effort to unleash hydrogen, the EU has identified it as one of six key strategic areas where major action and investment are needed. For firms like PowerCell - which received joint-funding and help from the EU’s Horizon Europe programme – that matters.

“It’s been very important, but it’s not only the financial support, it’s also the opportunity to work very closely together with the customers – the car manufacturers – and leading suppliers and research institutes,” Ekdunge explains.

Building a hydrogen based economy

In spite of its massive potential, building the infrastructure for a hydrogen based economy remains a major challenge and will take time. But one European public-private partnership is seeking to change that. The Fuel Cells and Hydrogen Joint Undertaking is a collaboration between the European Commission, industry and research organisations.

"Since 2008 we’ve been managing 263 projects for about, public private money, 2 billion euros,'' explains FCH JU Executive Director Bart Biebuyck. He adds, "For us now, the logical next step would be to scale up, and for that, we will mainly focus on innovative manufacturing technologies.”

Bart Biebuyck is the Executive Director of the Fuel Cells and Hydrogen Joint Undertaking. Business Planet caught up with him to find out more about what the FCH JU does and to see how hydrogen technologies and fuel cells will change tomorrow's world.

"What is the Fuel Cells and Hydrogen Joint Undertaking exactly? And how are you helping to lead the hydrogen revolution?"

“Well the Fuel Cells and Hydrogen Joint Undertaking is a public private partnership working together with industry, research, and academia but also with the European Commission, in terms of the Transport Energy and the Research Directorate. And together we are managing 263 projects so far, for two billion euros, and now we are looking to the future and there we really need to scale up. And for doing that we will mainly be focusing on manufacturing technologies, but also we need to look into heavy duty, so we have to look at for example trucks, trains, aviation. It's a very new area and we know that hydrogen has the potential, so we need to explore that.”

"Fuel cells, hydrogen technology. Is this the route to cleaner air in our cities?"

“Absolutely, because first of all this technology does not emit any emissions. Only water comes out. And so this technology can be used in transport, but also it helps to heat up your houses. Hydrogen, today unfortunately, is still from fossil fuel base, from gas. But in the future, we are actually now working on it, to green that hydrogen, and thanks to the innovations that we have done in electrolytes, we will be able in the very near future to produce green hydrogen at the same cost of fossil-fuel based hydrogen today.”

"What’s being done to scale things up, to build the necessary infrastructure, so hydrogen can become a reality?"

"During the last 12 years we really have been developing this technology and now, since two, three years, we have been demonstrating in the streets, in the field, that this technology works. So the next step now is logically we have to scale up, and what we will see in the next five years, we will see more of these demonstration projects come out, bigger demonstrations, we really see that mass production will start from 2025 onwards. And at the same time also, we will have to start building our infrastructure for a big distribution of hydrogen, like we can use the natural gas pipelines for transporting hydrogen, so that will have to be transformed and you will see that in the next 10 years, this will happen, but by 2030 I'm sure we will be in another world and hydrogen will be a big part of that."

“If I’m an entrepreneur or small business working in this sector, how can you help?”

“Well, if you have an innovative idea and it helps us reach our objectives, we might fund it. But maybe more importantly, we can offer you a unique platform where you can get in contact with other businesses, with academia and who knows one day you form a strategic partnership.”

Explainer: Why is the EU betting on hydrogen for a greener future?