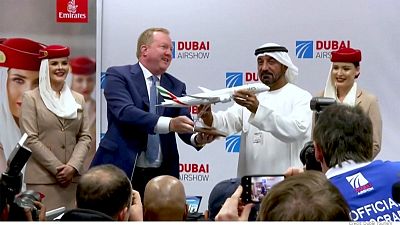 All eyes were on rivals Airbus and Boeing at the Dubai Air Show as the two aerospace giants competed for billions of euros worth of orders.

Airbus got off to a good start when host airline Emirates signed purchase agreements for 50 of its extra-wide-body A350s.

Around 46 billion euros changed hands during the air show.

Boeing’s 737 Max jet has been grounded since March after fatal crashes in Indonesia and Ethiopia.

The company announced this month that it would halt Max production in January with no date set for it to resume.

Charlie Miller, Boeing’s Vice President of Corporate Communications, said: “The plane will return to service when the Federal Aviation Authority and the other global regulators around the world tell us that it's safe.”

Despite the uncertainty, Boeing still secured 60 orders for the jet.

This year has been a historic one for space exploration in the UAE with the successful voyage of its first astronaut, Hazzaa Almansoori. Now the emirate is setting its sights on interplanetary exploration.

Aalem al-Marri, head of the UAE’s astronaut program at the Mohammed bin Rashid Space Centre, told Target Dubai: “Last year we launched what we like to coin the first fully-developed satellite in the UAE. This September and October we had another huge milestone as well, which was the launch of Hazzaa al Mansoori - the UAE’s first astronaut, the third Arab in space and the first Arab to go to the International Space Station.”

Al Mansoori told Target Dubai that his time on the International Space Station was “an amazing experience”.

“I went to space and I have this appreciation more for the Earth: peaceful, beautiful with no borders, with no country names. There you just see blue oceans, mountains and you just get amazed with that view. We are really lucky to be here on our planet.”

NASA astronaut Andrew Morgan said at the time: “For his country he is the Yuri Gagarin or the Alan Shepard. He’s the first for his nation and it’s a big deal.”

Next the UAE has its sights set on Mars … and women have a huge part to play.

Al Marri said: “We love Mars. Next year’s big objective is exactly that, Mars. We will launch jointly with the UAE Space Agency. We will be studying the Martian atmosphere for the first time in a whole Martian day.”

Diana Alsindy, a propulsion development engineer at Virgin Orbit, said: “To say that there’s an Arab country which is really invested in building satellites to Mars and Space is fascinating. Seeing more women into this field, it means that we’re doing something right.”

Al Marri said: “Over 50% of the engineers at the centre are women and about 80% of our science team is led by women.”