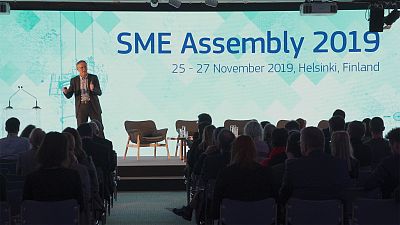 This year the SME Assembly -  the premier European event dedicated to entrepreneurs - tackled the issue of sustainability.

Delegates set out to understand if companies betting on 'green' growth are making the right choice, what kind of support and funding is available and what challenges do they face.

In Europe, SMEs represent some 99.98% of all European companies. Janez Potočnik is co-chair of the UN International Resource Panel and former European Commissioner for the Environment. He is heavily involved in promoting circular economy models and believes SMEs need to change their way of thinking.

“You don’t need a car, you need mobility," he explains. "If you think of it in that way, you can create new types of incentives."

The idea of taking a different approach is behind Finnish company, Paptic. It has launched both a new technology and a material that replaces plastic packaging. In addition, the product can be adapted - with no major investment - to all existing production lines.

Composed of wood fibre, it looks like paper but is as resistant as plastic and as soft as a textile. The company believes the product has phenomenal market potential.

“It’s a market where roughly 30 million tons of different types of materials  - most of it plastic films - are used annually,” says Paptic founder, Esa Torniainen.

In the past two years, turnover has increased tenfold and the workforce has doubled from 10 to 20 employees.

To benefit from future growth, the company needs to access more funding. Leading Economist Mariana Mazzucato believes the rules governing funding must adapt to meet the needs of companies leading the way in this sector.

"The entrepreneurs we need for a circular economy may need investments of ten years or fifteen years," she says. "The key thing is patient finance. Second, we need to welcome risk-taking. When learning to ride a bicycle you need to fall off many times. And if we penalise failure, we won't get a new type of economy."

The European Commission - which organised the event- is about to launch its 'green deal'. An ambitious plan that aims to make Europe the first carbon-neutral continent by 2050. And it should come complete with concrete measures for entrepreneurs.

"I think the big, new elements we have to address are sustainability and digitalisation," explains Kristin Schreiber, the European Commission's director for SME policy. "I think the two often go together because sometimes if you digitalise you become more sustainable. And then it's a completely new set up in terms of international trade patents."

The meeting in Finland was also an opportunity to showcase several successful initiatives. This year, a project from The Netherlands walked away with the big prize at the European Enterprise Promotion Awards.Green PACiLab is an innovative hub which aims to support entrepreneurs who are driven by circular and sustainable values.

Proof, if any is needed, that 'green growth' really is on the rise.