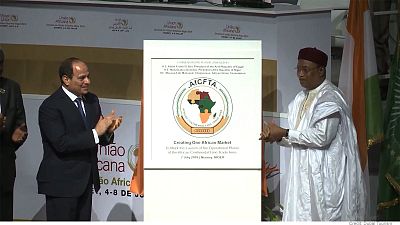 In this month's Business Line programme, we look at the Global Business Forum on Africa.

In its fifth edition, the two-day event in Dubai explored the challenges and opportunities associated with doing business in Africa with many companies looking to the continent as the next big investment frontier.

The rise in technology and a changing political landscape appears to have boosted confidence in Africa on the whole, be it reformist leaders such as Ethiopia's Prime Minister Abiy Ahmed, who received this year's Nobel Peace Prize, or the signing of the African Continental Free Trade Agreement (AfCFTA) almost two years ago, which is set to create one of the world's largest single markets for goods and services.

The UAE is one of several countries looking to strengthen its ties with the continent. This could be music to the ears of some African leaders who already view Dubai as a blueprint for how to develop their own economies.

The UAE is reviving one of the world's most ancient trade routes having established itself not only as a key gateway into Africa but also as the continent's second-largest foreign investor after China.

"If you look at "One Belt One Road", there is a big push for the UAE government, the Chinese government, and African governments to actually link those three regions together," explained Isaac Kwaku Fokuo Jr, Founder & Principal, Botho Emerging Market Group.

In 2018, non-oil exports and re-exports from the UAE into Africa reached around €18 billion. Many of these would've traveled via DP World, which operates in seven African countries. Africa represents 10% of the port giant's global revenue and it's growing. But there are other UAE players active on the continent.

"Al Ghurair Group, their printing division has a really massive African business, from voters cards to passports, to even currency that they actually print in Dubai for Africa," said William Stenhouse, Founder, UAE-Africa Networking Group.

Stenhouse is also Vice President, Agility Africa which is another logistical business tapping into Dubai's links with Africa.

"When we look at the major markets that Agility is expanding into, Emirates (airlines) goes to all these destinations or there are good connections," said Stenhouse.

But there are challenges when dealing with any emerging market and many companies need guidance on how to best conduct their business on the ground.

"I think once you're able to get that right as a business is when you're able to actually properly succeed in Africa," explained Tina Blazquez-Lopez, of Counsel, Bryan Cave Leighton Paisner.

Dubai is attractive for business

African companies are attracted to Dubai because of its expertise in areas such as infrastructure and construction. There are some 21,000 of them operating in the Emirate, up by almost a quarter in just two yea0rs. Key incentives include tax breaks as well as access to visas and Islamic finance.

"As big as 50% require Islamic and Sharia compliant financing documents. We've seen it in the technological space as well as in other areas and sometimes that involves a more innovative approach," added Blazquez-Lopez.

While the UAE wants to trade with Africa on the whole, there are also opportunities in its own back yard.

"Imagine a zone of a common market between countries on the Red Sea on the Africa side and the Gulf Corporation Council's (GCC) side with leadership from the UAE. For instance, currently, you have a few flashpoints in terms of geopolitical issues. When those issues are resolved, I think you're going to see a huge opportunity and tremendous growth in the Red Sea region alone," added Isaac Kwaku Fokuo.

This is something that could further unlock the UAE's untapped export potential in Africa.

Why is Africa so important to the UAE's future?

Euronews spoke to Hamad Buamim, President and CEO, Dubai Chamber of Commerce and Industry who was responsible for the Global Business Forum on Africa and he explained how Dubai is looking at different ways of working with businesses on the continent.

"When you look at the trade with the world, maybe in the past five years, it has been either flat or negative with many parts. But with Africa, it's continually growing, almost doubled."

"What we've been doing more (in Dubai) is really to partner with somebody like Carrefour and instead of selling to Africa, establish in big markets like Nairobi or even Tanzania. They're looking with us into Ethiopia, 100 million population, ten times what we have here in UAE. This is something we want to do more with."

Buamim explained that any challenges could be worked out together. "Financing is not easy but we believe if they (the companies) package it in the right way, if they get the right advice, the right business model, they (can) come here to Dubai (and) they'll be able to have a network of venture capitalists who have a lot of interest in Africa."

"But honestly, they don't know how to get to Africa because it's complicated but this is more of a partnership with Africa. Let Africans do it. You fund them. Be part of it," explained Buamim.

Given the current global economic situation, can I ask how you view the investment climate not just in Africa but also in the UAE?

"I would say for the region, including UAE, it has limitations so definitely investors always look for opportunities elsewhere. Africa has certain uncertainties, certain risks but also has the appetite."

"We have a good track record since 2012 of most of our investors who went to the places we identified. They've been very satisfied with the returns they were able to accomplish in these countries. I want this model to be applied to other emerging markets, whether in Latin America, Oceania or Central Asia" added Buamim.

Exchange of ideas and experiences

More than 1,500 people registered for this year's Global Business Forum on Africa, ranging from Heads of State to Business Leaders and Young Entrepreneurs. How does a continent of over 1 billion people scale up? That was the main theme as industry experts gathered to exchange ideas and experiences in the UAE.

Kenneth Obiajulu, Managing Director, Farmcrowdy is hoping to expand out of Africa and said he received a lot of support.

"My mentor has been amazing. He understands the nature of what we're doing in Nigeria and trying to expand into the UAE."

Dubai as an Emirate believes collaborations like these could benefit both its own economy and Africa, as a new and exciting chapter appears to open up.

"People in Africa are innovating to respond to all manner of things," explained Ronald Kato, Africa News. "From fighting crime to children's education and food security, everyday transportation to emergency response."

Going into 2020, traditional sectors like mining and agriculture will remain important key drivers of growth, as Africa also looks to establish itself as a manufacturing base. Electricity access is still a big challenge, while a new political landscape is emerging.

"If you look at Angola, South Africa, the leadership stability in Kenya, there are new leaders, new frontier men who can chart a more constructive course for the continent," said Goolam Ballim, Chief Economist, Standard Bank South Africa.

But that road could prove an uphill battle for Ethiopia's internationally celebrated Prime Minister, Abiy Ahmed. Though his country was Africa's fastest-growing economy in 2018, it's grappling with ethnic tensions.

"He really wants to persevere despite these challenges that are emerging in different parts of the country," explained Melesse Minale Tashu, Senior Economic Advisor, National Bank of Ethiopia. "The society as a whole is really moving forward and that doesn't mean that the road is going to be smooth."

A mixed picture as Africa enters a new decade that could prove its most prosperous so far.