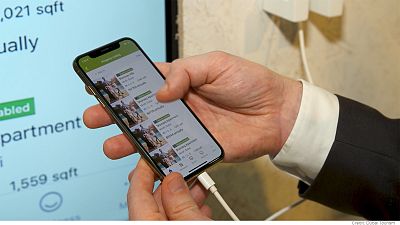 One leading expert at GITEX, Gulf Information Technology Exhibition in Dubai describes them as becoming like the body of an Artificially Intelligent mind.

"To make a smart city that's really smart rather than just being called smart, you need your car traffic analytics, you need medical analysis on people, you need a smart power grid, you need a model of everything happening in the city," says Founder & CEO of Singularitynet, Ben Goertzel.

"You need to integrate all these systems together into a whole. So then the city almost becomes like the body of an A.I."

"Now we're seeing the build-up of specific subsystems of cities in smart ways. And I think over the next few years you're going to see these subsystems connected together until you get really an integrated mind for the whole city."

In Dubai, there’s one single app that claims to be able to do just about anything and an exhibition by Smart Dubai demonstrates how.

"We have an application called Dubai now with the aim to put all the government services under one umbrella. So we have over 88 services currently in Dubai Now all from one single application, says Wesam Lootah, CEO of Smart Dubai.

"If you want to drive a car in Dubai, first you need to have a driving licence. The lessons are provided by the private sector, but the licence is provided by the government. To own a car you will buy a car from a dealer, but to register it is with a government entity. To finance it you need to go to a bank. To insure it you need to go to the insurance in a sector. You can do them all from one platform which is called Dubai Now," says Director-General of Smart Dubai, Dr Aisha bin Bishr.

"What we are now doing is expanding our view and also including the private sector and the digitization of services," says Wesam Lootah.

"You can sign contracts selling properties, owning properties on top of this platform and these digital signatures are already recognized by the legislative agencies in our city," says Dr Bishr.

"It’s a really good app to have all these applications coming to one place where you can actually see everything whether it’s from Dubai courts to your immigration, to your Dewa bills to your fines, to your parking. So for us, it’s very easy to use. We can use it from home, from the office." says Dubai Now user & founder, Blue Camel, Patrick Daniel.

"I use my dashboard because I can see everything on here, such as payments related to fines or electrical bills. If you go to driving it will tell you the nearest parking to you. You can see what you have that needs to be renewed or if there is a fine on it. So this is basically why I like Dubai Now and it's all this integration of all these applications into one."

Dubai Now user, Sarah James uses it to pay all her bills and utilities; "It saves me receiving email notifications or paper to pay my bills and I can pay the whole month’s worth of bills in about 30 seconds."

But who has access to all our data and how is it protected?

"We put a fully-fledged establishment around the data," says Dr Bishr.

"This drives efficiency behind the data and also puts ethics and principles around the utilization of such data. Privacy and security of the individual are at the centre of this mechanism."

While apps like this could soon spell the end of bureaucracy as we know it and eliminate paper-use, the cornerstone of any smart city is the efficient regulation of its power supply and that means smart power grids.

"When you build a grid infrastructure you have to build it to your peak demand. And peak demand can be five times larger than the baseload or some other load levels during the rest of the day," says Dakota Selmer, founder of Xos Trucks.

"When you start to build infrastructure that's five times as complex and as robust as it needs to be for most of the day, there's a lot of waste."

So the use of a smart grid makes the use of electricity more efficient as well and prevents waste of infrastructure development.

Making Dubai the ‘Smartest city in the world’

Smart grids are a key component of the Dubai Electricity and Water Authority’s strategy to make the Emirate the ‘Smartest city in the world.’

The local authority has invested 1.7 billion euros in smart grids and has reduced losses from electricity transmission and distribution networks to just 3.3 per cent.

Thousands of customers have already installed solar panels in their homes with a total capacity of around 106MW. These are connected to the power grid and any surplus electricity generated goes towards cutting bills.

"The technology is going to be incredible but we need to roll it out with the safeguards we need to roll out with a decentralized control system because a safeguard that involves a small elite safeguarding everyone else has some well-known failure modes associated with it," says Ben Goertzel, Founder & CEO, Singularitynet

As these technologies link up, our cities look set to get truly ‘smart’.

But how we protect private data needed to drive them must be equally smart.

Dubai sets its sights on becoming the happiest place on earth

Thousands gather for the AI Everything event in Dubai