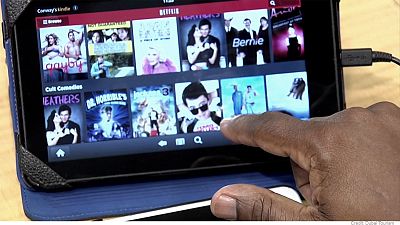 In the Business Line programme, Euronews looked at how Apple is preparing to take on Netflix plus why the rise and fall of Wework could spell trouble for other tech companies looking to list.

The way we consume television has changed dramatically over the last decade, as streaming platforms such as Netflix have grown incredibly popular around the world.

According to Reuters, it boasts close to 160 million subscribers globally, who for just a few Euros, get to enjoy original content from their own countries as well as acclaimed shows such as “The Crown”, “Stranger Things” and “Orange Is the New Black”.

The success of Netflix could be due to its relatively low pricing and lack of any major global competition, but all that could be about to change.

Apple – the most profitable public company in the world is about to take on the biggest streaming giants in the business.

“The Morning Show” starring Jennifer Aniston is among eight original series’ available on Apple TV Plus, a brand new platform launching in November. It’s doing so, according to the Financial Times, with an original content budget of over €5 billion Euros.

Maaz Sheikh, CEO, and Co-Founder, Starz Play said, “Their strengths are clearly their brand. You know, they already have an established Apple TV platform device. I think Jennifer Aniston’s selfie that she took, one of the most successful social media posts in the history of facebook and Instagram. She has a very, very strong following. And for Apple to pull that kind of talent is very impressive.”

But Apple TV Plus is only one of several services looking to challenge well-established platforms like Netflix and, of course, Amazon Prime, which so far hasn’t produced any breakout hits.

Key new players include WarnerMedia’s “HBO MAX”, “Disney Plus”, Viacom-owned “Pluto TV” and “Peacock” from NBC-Universal, some of which won’t immediately be available outside of the USA.

Sheikh added, “Whether it’s Disney Plus or Apple TV Plus, I don’t think you can underestimate the impact they’ll have on Netflix and its market share.”

Netflix welcomed the new competition in its third-quarter earnings letter to shareholders and despite dealing with slowing subscriber growth, the company posted its biggest profit so far in 2018. It also has an unrivaled global footprint that could help offset lost market shares in the USA or elsewhere.

“You know, they’ll be a very powerful brand for years to come. But I think the expectations of growth and profitability that investors have of them are very aggressive,” added Sheikh.

While the new streaming landscape will mean more choice for consumers, it could also accelerate the speed at which young viewers abandon traditional broadcasting, which is already struggling in the digital age.

Bozoma Saint John is heralded as something of an industry leader for her work with brands such as Pepsi, Uber and Apple Music. Euronews went to meet her at GITEX, one of the biggest Tech shows.

Jane Witherspoon, Euronews: “You’ve had a pretty formidable career, you’ve worked with Dre at Beats, Uber and now William Morris Endeavor. How have you made those business decisions?”

Bozoma Saint John, Chief Marketing Officer, William Morris Endeavor: “It’s the craziness of passion. You know, honestly, passion about the work; passion about humanity; passion about just culture; and what makes us tick. I love all of that! And so for me, I’m always chasing what is essentially new and interesting in different industries."

"Unfortunately, there have been some challenges along the way. Just being a black woman in corporate, which has forced me to move sometimes and I’m not ready to move, but all for the greater good.”

Jane Witherspoon, Euronews: “Why are conferences like this important to business?”

Bozoma Saint John, Chief Marketing Officer, William Morris Endeavor: “If you’re a business in the 21st Century and you think Tech isn’t going to impact you, you’re dead wrong, you know. To me, it’s so important for all kinds of businesses to understand Tech, to understand how Tech will help their business and how sometimes it can be a danger to it. There are ways in which we are creating that are new and uncharted, sometimes scary, and ways that we are just reinventing the old.”

_Jane Witherspoon, Euronews: “How is it being a black woman in what is predominantly a white man’s world?_”

Bozoma Saint John, Chief Marketing Officer, William Morris Endeavor: “It’s all a white man’s world, but it’s no worry, women are coming, it’s our age, it’s our time and it’s not even the future is ours and the future is female. The present is female and so I want us to all gather our forces and by the way, not just women gather forces, but men gather forces too. It’s better for your business it’s better for humanity, it’s better just for your conscience to make sure that women are along the journey. But, if you’re worried about business, it’s better for the business. It is not even a theory. It’s an actual fact.”

“If you want to enter into business today and you are just starting out don’t follow the rule book. The real thing that you have to do is follow your passion. If you’re following your gut and be true to it. This is again not something that is just said and then forgotten. To be true to the passion. If you’re not enjoying it, you’re not going to do your best work. And so find that always.”

Jane Witherspoon, Euronews: “How important is it for you to be a role model to other women?”

Bozoma Saint John, Chief Marketing Officer, William Morris Endeavor: “Regardless of what platform you’re on, whether you are high in the executive ranks of the business or you’re the usher in a church, you know that you are using that platform to be a role model in the best way possible. To make the world a better place and again not some corny way, but actually a really dynamic way. Revolution doesn’t happen because people are nice. Revolution happens because people push. And so, let’s hope that everybody keeps pushing.”

Co-working giant Wework has made the headlines in recent weeks, but for all the wrong reasons after what was meant to be an exciting new chapter for the firm ended in crisis.

It was a fall that took many by surprise as Wework’s plan to hold a multi-billion dollar IPO failed spectacularly for the real estate giant which has over 800 co-working spaces around the world.

Mark Dixon, CEO, International Workplace Group said, “Well, they’ve changed our industry in a very good way. They’ve invested a lot of money into awareness of this, you know, a fantastic way for companies to deploy their real estate. Quite different from what they’re doing now.”

But Wework’s planned listing on the Stock Exchange was called off after investors questioned its large losses and management, under co-founder, Adam Neumann, who branded it a ‘Tech company’ despite being the largest private occupier of office space in Manhattan, Washington D.C. and London.

Weeks later, Softbank, which was already a major stakeholder in the firm’s parent company, secured a takeover deal worth over €9 billion ($10 BILLION), upping its share in Wework to 80%. Moreover, it offered Neumann, who had already resigned as CEO a generous side deal to also step down from the board. But Wework isn’t out of the woods just yet.

“I don’t think anyone would want to see a company where they’re having to lay off, we’ve heard, lots of people. So you know, we wish them the best,” added Dixon.

In addition to the funding, operational support and improved governance from Softbank, Wework confirms in a press statement that they've also received €1.3 billion ($1.5 billion dollars) which it says was an acceleration of an existing payment obligation which positions the company for the future.

Wework's recent crisis could spell the end for other bloated valuations in the Tech sector with major players such as Airbnb looking to list next year.

Click on the player at the top of this page to watch the full programme.

Brexit economic woes and the rehaul of British Airways