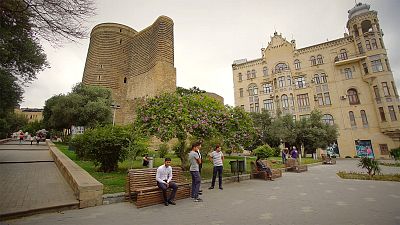 The beautiful narrow streets and walls of the Old Town in Baku, including the famous Maiden Tower, date back to at least the 12th Century, with some researchers convinced some parts go back much further, perhaps to the 7th century.

The remarkable area became a UNESCO World Heritage site in 2000.

It's here in Azerbaijan’s capital that Unesco’s 43rd World Heritage Committee met to decide over the course of ten days which sites and monuments needed to be added to the list - and which ones are in danger.

More than 2,500 delegates, committee members and experts participated in this annual forum... but who can apply for their site to be included? And what are the criteria that must be fulfilled to be part of the list?

Mechild Rossler, Director of the World Heritage Centre said the meeting is a legal process:

“It’s signed by 193 countries and it's only an official delegation from a state that can present a nomination.

“But in some cases, local communities, NGOs and associations push for a site to be nominated so that civil society is also involved.

“The most important criteria is that a site must be of outstanding universal value.”

In Baku, 29 new sites from an original 37 nominations were added to the list because of their cultural characteristics and their unique quality.

Being included on the list has some strong advantages: attractiveness to tourists, world renown - but they carry obligations for the countries they’re in, which are then responsible for their conservation.

Abulfas Garayev, Minister of Culture for the Republic of Azerbaijan said it’s a very thorough process:

“We all have to follow the recommendations of the international community to improve the situation for the sites, make them better protected and to ensure that the government, the state itself, the state parties, whatever country is presenting its sites, are doing the very best to protect the heritage. which they want to be inscribed.

On the sites, it falls to the site managers to make sure things get done. Pascall Taruvinga is the Chief Heritage Officer of Robben Island, a listed historical and natural site in South Africa.

One of Pascall's challenges is to protect Robben island site from climate change:

“Any gradual changes which affected the island habitat will affect also the wild animals that we have on the island.

“It affects the buildings; we have to do maintenance more often than on other sites and that's very expensive.”

Climate change is therefore an important factor, but so are any development plans or armed conflicts, such as the one currently affecting Yemen’s capital, Sanaa.

Endangered sites around the world

This year, the UNESCO Committee identified 53 sites in danger around the world. Being included on this list may seem daunting to some of those included, but according to UNESCO, it works well as a powerful tool to identify and deal with issues.

“The danger list of World Heritage sites can be used to help the countries they’re in to obtain more international funding and raise awareness about the threats to the sites. So it actually represents help and support for the site instead of a criticism.

Eugene Jo, Programme Coordinator, for the International Centre for the Study of the Preservation and Restoration of Cultural Property (ICCROM) said it’s important for site managers to have the skills to deal with crises:

“We have a specific course called first aid for cultural heritage in times of crisis.

“So this is actually to build up the capacity of site managers on how they should respond to these kind of threats when they happen.”

There are currently more than a thousand sites in the UNESCO's World Heritage list.

The next meeting of the World Heritage Committee will be held in 2020 in Fuzhou, China.