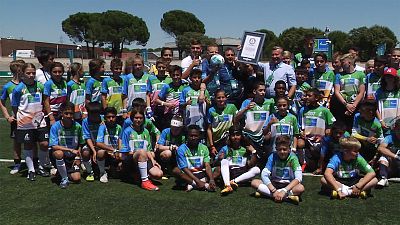 Football for Friendship was established in 2013 to teach young people about the value of multiculturalism as well as develop their football skills.

Thousands of 12-year-olds have taken part in the annual programme. Hundreds of them travelled to Madrid last week to get involved in training sessions, camps that had workshops with team building exercises and a tournament between all the participants.

Upon arrival, attendees are split into mixed gender teams composed of multiple nationalities. They prepare together for the international tournament which is the climax of the event.

International star Roberto Carlos presented the trophy to the winners. He told Euronews that he would have wanted to take part in the event as a child:

"I would have learnt more and I would have reached the elite teams and Brazil national team a bit earlier. Today children have what we didn't in the past. They have to enjoy it to the maximum."

This year was the 7th time the event was put on. Children from 57 countries converged to form new friendships and learn the benefits of playing football.

The event is put together by Gazprom, the largest oil producer in the world based in Russia, who also provide each child with tickets to the UEFA Champions League final.

The event broke a new GUINNESS WORLD RECORD® for Most Nationalities in a Football Training Session. This was verified by Anna Louise Orford, a Guinness World Records Adjudicator:

"The uniqueness of this record it shows that we can all do it. You can be tall, you can be young, you can be a girl, you can be a boy, that you can take part. It doesn't matter that countries maybe are not the friendliest to each other, you can still take part and play football."

The record to break was 50 different nationalities but Football for Friendship managed to include 57 in their session.

Football for Friendship to set digital world record during pandemic