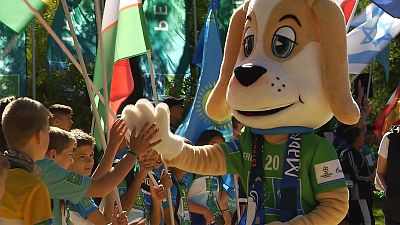 Football for Friendship is an annual event designed to help young people learn the core values of football. The project has brought together hundreds of children from nearly 60 different countries to Madrid, the city hosting the Champions League final. Here the organisers hope to promote healthy living, tolerance of other cultures and the children's football skills.

This event is put together by Gazprom, the largest producer of oil in the world, as part of the Gazprom for Children global project. Football for Friendship was started in 2013 with former footballer Franz Beckenbauer as its ambassador.

There are also educational sessions at the Football for Friendship Forum. Viktor Zubkov, chairman of the board of director for Gazprom said they cover important issues:

"Experts from many countries - FIFA, UEFA, many sports clubs - Schalke, Zenit, Barcelona - gave a lot of recommendations on these issues".

Having started on May 29th, children have already attended two days at camp with workshops devoted to team building. The organisers hope this will help attendees form bonds with people from different countries.

A major feature of this project is the Football for Friendship World Championships. Children are split into 32 mixed gender teams, with each team containing a range of nationalities. They then compete in a tournament.

For attendees who would rather pursue a career in journalism than in football, there is the Children's Press Centre. Here participants get the chance to make their own reports on the project. They interview others attending the camp, cover the action on the football pitch, and learn from industry professionals. 32 children in total are on the team.

Ilva is attending Football for Friendship:

"I think it is my future job, I'm writing in a newspaper, I'm talking with people different languages, I'm translating some things, so I practice my journalism skills.”

Their work gets to feature on the Football for Friendship Facebook page. The final aim is for the attendees to have their own material that covers this year key events.

One participant wrote her own book after attending in 2017.

Research released in March from Washington University shows that participation in structured team sports is linked to lower levels of depression in boys between the ages of 9 and 11.

Shrinkage of the hippocampus is often associated with depression in adults. This part of the brain regulates memory and responses to stress. By participating in structured team sports, for instance, an after-school football club, children in the study experienced a higher hippocampal volume.

This was different from team sports that were unstructured. The author of the study suggested it could be due to the regular social interactions that are experienced in a structured environment that might lead to these benefits. Art and music were found not to promote the same growth.

The study had a nation-wide sample of nearly 4,200 American children between the ages of 9 and 11. Their brains were scanned for variations in hippocampal volume.