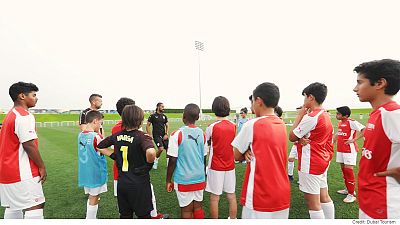 From football to rugby to cricket, Dubai is a hot bed for sporting academies drawing on the expertise of international talent.

Together, they have a lot to offer to the next generation of sporting stars, as well as contributing to the wider community.

The economic impact of sport in Dubai is substantial - around 600 million Euros. It's no surprise that the city's sporting academies are big business. They offer expert coaching, promoting healthy living and also helping the next generation of stars to achieve their sporting dreams.

He has never forgotten the ethic he was taught at the famous north London club:

"Football’s a team sport. The standards here are very, very high. It's not all about winning, but it is important that the kids coming into the school and joining the courses work hard and develop."

Arsenal Soccer School Dubai opened in 2009 and since then over ten thousand players of all levels and abilities have passed through its doors.

But as Ian says, it's not just for people who have world class potential:

"We have a mixed bag at the school in terms of ability levels. We have some boys that just like the football and the social aspect, but we have the elite boys as well.

"I think as coaches, we always like to develop the players to their best level and hopefully one day, one of the guys will make it to the first team for Arsenal."

The boys at the Soccer School all train hard to improve, no matter what level they are at. They practice at home too, to make sure that they maximise their personal potential.

Ian Selley is also keen to emphasise that as well as teaching a professional syllabus to its members, the school also offers something to the wider community:

"Our school is pretty much built for the community as a whole. We do of course have an elite side to the school, but it’s Important to bring all different abilities along, as well as different nationalities from various countries."

Football is certainly not the only sport being taught at professional level by an established pro in Dubai.

Mike Phillips is the most capped international scrum half in Wales' history. He tours his Rugby Academy and runs regular sessions in Dubai.

Mike still loves the involvement in his beloved sport:

"I missed the game when I retired from playing, so it's great being involved in rugby again and helping the youngsters come through. I enjoy teaching them the values of the game, which are great and so important to youngsters.

"It's all about discipline, respect and all the great ethics that come with rugby."

There are over 700 sports academies in Dubai and Mike is aware that it's a very competitive market:

"It's exciting. I enjoy going out there and to trying to make it work for myself, making good rugby sessions and making sure the kids are learning but obviously making it as fun as possible."

Mike say it's important in a society dominated by social media and technology, especially for the young, to unplug from the iPads and smartphones:

"You see a lot of kids now on their tablets and other devices and and it can be a little bit annoying.

"I think it's really important that kids  get pushed to go outside and have fun. I really want kids to be out there and playing sport – any sport.

Mike will be encouraging that frame of mind when he takes his academy on tour across the U.K. in the summer.

National UAE team batsman and spin bowler Rameez Shahzad believes the facilities at the I.C.C. Academy are the best in the world:

"We have a good programme running here. With the machines that we have, as well as the coaches, you have everything available that an aspiring cricketer would need."

Sport as part of people's lives

Will Kitchen, General Manager of the I.C.C. Academy, believes sport should be an integral part of people's lives:

"Human beings are built to be active and I think the fact that there are so many academies here demonstrates the fact that people actually want to spend their free time being active."

With a wealth of choice for any keen sports enthusiast, Dubai’s many academies demonstrate the level of demand for these thriving businesses which aim to encourage a healthier lifestyle whilst also ensuring fun along the way.