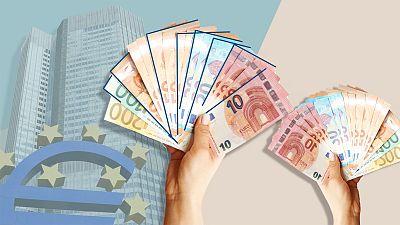 The single currency has come a long way. From a dream project not many believed in, to the early discussions on an economic and monetary union in the 1960s, to finally now - the currency of 340 million Europeans and used by a further 175 million people worldwide.

A brief history of the euro

• The euro started its journey in 1999 when 11 countries fixed their exchange rates and monetary policy was passed to the European Central Bank.

• Over the years eight more countries joined the club.

• The euro’s second decade was largely overshadowed by the crisis.

• Five eurozone countries had to seek help amid by the increased speculations over leaving the euro.

• Emergency measures were introduced, including the European Stability Mechanism.

• The need for a banking union emerged in order to prevent a repeat of the crisis in the future when the 7 remaining EU states will be required to join the euro area, once they meet the convergence criteria.

The ‘convergence criteria’: an example from Bulgaria

The convergence criteria are specific economic conditions and indicators, set by the Maastricht Treaty in 1991.

One country currently moving closer to joining the euro area is Bulgaria. Last summer the country took two major steps towards joining it, including agreeing to join the exchange rate mechanism, also known as the ERM II, as well as joining the European banking union.

Bulgarian public finances are healthy but some reforms are still needed before it can join the euro club. Following its adhesion to the ERM II and banking union, both of which will be fully in place by the end of 2019, the country will still have to wait a mandatory minimum 2-year waiting period before the euro can replace the national currency, the lev.

But why does Bulgaria want to move to the euro? Nedelcho Nedelchev, CEO and Chairman of the Management Board at Fibank told Euronews: "It will increase confidence, which will most probably lead to increasing the ratings of the banks, giving them access to cheaper financing. Of course, the fact that the European Central Bank will be supervising the largest systemic, important banks on top of the Bulgarian regulator, will also create more confidence in the public and in the counter-parties of the banks.”

Bulgaria ranks 4th out of 28 countries when it comes to trust in the EU. However, growing impatience, as well as the fear of hyperinflation—which the country suffered from about 20 years ago—has made put many Bulgarians off the adoption of the single currency. Now barely 51% are in favor of leaving the lev and adopting the euro and 47% even believe the new currency will hurt the Bulgarian economy.

This contrasts with data from inside the euro zone, where three out of four people say they are happy with their currency.

“This is a result of the bad experience of our neighbouring countries like Greece, like Spain, like Portugal, now the difficulties in Italy. This makes Bulgarian society more suspicious.”

Joining the euro zone would certainly help with exports and Bulgarians are already used to using euros when abroad, sometimes even in their own country. The main concern is over abusive price setting during the changeover, as Lyuboslav Kostov, economic analyst at the Confederation of Independent Trade Unions in Bulgaria describes:

“Most of our members are concerned that when we adopt the euro, prices will increase sharply but in the same time wages will be at the same level. But I think this not the case. Our inflation is stable, our fiscal stability is stable, our banking sector is stable. There are no economic obstacles.”

Interview with Mario Centeno: "It's much more than a currency"

To talk about the past and the next 20 years of the single currency Euronews headed to the European Parliament in Strasbourg to meet Mario Centeno, Portugal’s finance minister and president of the Eurogroup for the last year.

Sasha Vakulina, Euronews Business Editor: Joining me now on Real Economy on Euronews is Eurogroup President Mario Centeno. Thank you for being here! How important has the euro been for the European integration process?

Mário Centeno, Eurogroup President: It is much more than a currency. It is a part of the identity of Europe today. It brought stability in our currency, it brought growth in the last 5 years. It is a very important part of this project.

Mário Centeno: As a currency it is still a toddler. 20 years is a very short period of time for an institution as important as the euro. As most things that are man-made, we made it initially with some drawbacks and flaws, but through the crisis we were able to strengthen it quite a lot, we are today facing the cyclical fluctuations of our economies with a much stronger currency.

Sasha Vakulina: Let’s go a little bit more into the reforms agenda. What do you see as the most urgent changes and reforms when it comes to the stability and prosperity of the euro?

Mário Centeno: There are two mains reforms and an ongoing process that cannot stop. The two reforms are: the euro zone budget and the European deposit insurance system, which is the third pillar of the Banking Union. And there is one thing which we cannot stop, which is the risk reduction process. Countries in the euro zone today have a much lower risk in their banking sectors, in their financial sectors and also in terms of the budgetary position of our member states.

Sasha Vakulina: We are now marking the 20th anniversary of the euro. Let’s look 20 years ahead from now, the next 20 years of the euro?

Mário Centeno: I will see a much more mature currency area with stronger institutions, further integration.

Sasha Vakulina: And we have asked you to bring a real object to talk about the euro on the 20th anniversary. What is that?

Mário Centeno: It is a rugby ball! It is not easy to handle, pretty much as the euro. But the euro as a rugby team must advance as a block, with a fair play and all players count. It is very hard to play rugby with one player less in the pitch.

Sasha Vakulina: Thank you so much for this interview and thank you for watching, we’ll see you soon!