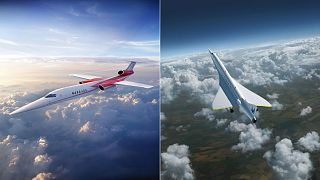 Imagine being able to travel from Washington DC to London in three-and-a-half hours. Currently, you’d be lucky to get there in seven.

But from 1976 to 2003, Air France and British Airways’ Concorde made such trips possible until soaring maintenance costs and poor ticket sales forced the supersonic jet out of operation.

Since then, only a handful of companies have dared to step into the void left by the airliner by developing their own superfast jets, and by finding ways to overcome flaws that led to Concorde’s demise.

Among the brave is aerospace Colorado-based start-up Boom Supersonic, which was founded less than four years ago, and Aerion in Nevada, which kick-started the race to revive supersonic air travel 16 years ago.

Boom founder and CEO Blake Scholl, and Aerion’s Senior Vice President and Chief Commercial Officer Ernie Edwards spoke to Euronews about their mission to break the sound barrier at the Farnborough International Airshow.