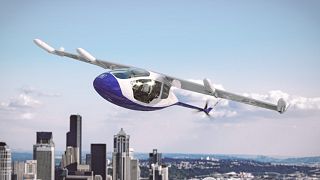 Flying taxis look set to transcend science fiction and shake-up the transport industry within the next decade if a raft of aviation giants and start-ups are to be believed.

The flying vehicles could theoretically skip ground traffic and speed up connections between suburbs, cities, and major transport hubs like airports and train stations, and a handful of companies are racing to develop their own models for the modern, wealthy commuter.

Earlier this week, Rolls Royce confirmed they had bought into its commercial appeal and unveiled ambitious plans to engineer an eVTOL plane concept (Electric Vertical Take Off and Landing) at the Farnborough International Airshow.

The British manufacturer designed a hybrid-electric plane, which they say could travel ‘further and faster’ than other concepts, to carry four to five passengers and confirmed they were seeking partners who could help bring it to market in the 2020s.

Other industry giants rolling the dice in the flying taxi game include Airbus with their CityAirbus and Vahana projects, Google founder Larry Page’s all-electric Kitty-Hawk, and Uber.

In 2016, the San Francisco-based ride-hailing app announced its plans to launch flying taxis as part of its uberAIR transit system by 2023. It has so far enlisted the help of five aerospace companies to manufacture these VTOLs: Embraer X, Aurora Flight Sciences, Bell Helicopter, Pipistrel and Mooney.

“It’s going to be a small aircraft for four or five passengers”, says Embraer X CEO Antonio Campello, who dished out the latest on his project at the biennial aviation showcase in Farnborough to fellow innovators and investors on Wednesday.

“We are going to make an aircraft that is fully autonomous – not on the first day – it’s going to start with a pilot, then progressively it’s going to become autonomous. [It will be] fully electrically powered.”

The craft would be battery-powered and propelled by electric roters which could transport its human cargo across 60 miles (96km) at a speed of 150mph. Embraer X also hopes that more helipads or “vertical ports” could be built in major cities to accommodate Uber’s flying taxi service.

“These aircrafts are mainly dedicated to urban regions, so we’re going to see them in the big cities to overcome the main problem that everybody has today which is living in a congested city.”

While Embraer's is still in the design phase, Airbus’ battery-powered CityAirbus craft is set to complete its first flight tests later this year and is on track to launch by 2023, according to the French aerospace giant. Their saloon-sized eVTOL is capable of flying within a range of 60 miles at 75mph (120km/h), and will at first be pilot-operated before transitioning into a fully autonomous vehicle as its technology improves, much like the Embraer X's concept.

“It’s going to really, dramatically change the way and the speed at which we can travel across cities and this is primarily enabled by the electrification of these kinds of aircraft,” says Airbus’ General Manager for Electrification, Glenn Llewellyn.

“What we’ve seen over the last years is a doubling of the watt hours per kilogramme – the amount of energy we can store in [batteries] – and that’s really enabling us to make these kinds of products a reality.

“Fully electric technology allows us to reduce the costs significantly compared to traditional technologies, and on top of that, allows us to have zero emissions in the urban environment in which they are going to be operating.”

But a critical hurdle that threatens to delay, or even prevent the roll out of a commercial air taxi service in the western world is health and safety, according to aviation safety expert and pilot, Anthony Venetz.

“If you’ve got a couple of tonnes of flying car that flies close to the ground, particularly in an urban area, that’s likely to cause a problem with people on the ground,” says Venetz, who runs consultancy firm Across Safety Development in London.

Removing pilots from cockpits means passengers’ lives will also be left in the hands of artificial intelligence that will need to make complex decisions and have snap reaction times, he continues.

“These air taxis are going to be autonomous vehicles so they’ll have to maintain separation from other airspace users, obstacles, buildings,” says Venetz. “They’ll need to make decisions about adverse weather conditions like thunderstorms or strong winds. They’ll need to be able to make decisions about system failures and how they’ll respond to that.

“They’re all things that pilots do now, and once you take them out, we’re relying on what sort of autonomous system is being designed to keep that aircraft safe and that’s the challenge for the manufacturers of those vehicles.”

What’s more, air-Ubers would not be allowed to fly anyway as lawmakers have not yet established guidelines for them.

“At the moment, the regulations for these vehicles don’t exist”, says Rolls-Royce's David Debney, the firm’s Future Aircraft Concepts Chief. “So you cannot certify [VTOLs] for public use because there is nothing to certify [them] against.

“[But] part of our research is to talk to EASA (European Aviation Safety Agency) and the FAA (Federal Aviation Authority) and the other certifying bodies around the world about what certification requirements would be needed.”

So with that in mind, how likely is it that companies like Rolls Royce, Airbus and Embraer X will take their air-taxis to the skies within the next decade as planned?

“In spite of the hurdles, I’m confident that this vehicle will be flying around carrying people, commercial flights, in the next five or seven years,” says Campello of his concept craft.

“It will take sooner than anybody expects because all the technology is available.

Airbus BelugaXL: What you need to know about the 'whale in the sky'