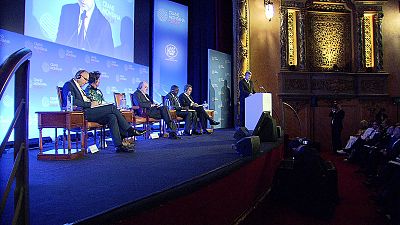 The terrorist threat is global, ongoing and unpredictable and people need to adapt to a new way of life: that was the theme of the Crans Montana Forum Conference on Global Security in Brussels. For the organizers, the challenge requires new policies in crisis management, the fight against corruption, migration and human rights.

The conference came a week after the European Commission presented a package of anti-terrorism measures, including stopping would-be attackers laying their hands on bomb-making ingredients, doing more to counter radicalisation and boosting protection around public spaces.

France is the leading the way.

“I hope that the EU will adopt the proposition of French president Emmanuel Macron to create a European intelligence academy, and also, I hope, a European Public Prosecutor’s Office to bring together counter-terrorism investigations. France will be holding an international conference on the funding of terrorism in January. We will really need to implement the structures needed to trace the funding and the money-laundering,” said terror threat expert Georges Fenech.

In response to the considerable means spent on propaganda by the so-called Islamic State, in particular targeting young people, the prevention of radicalisation is also one of the main priorities.

“There are two ways to stop an act of terrorism,” according to Serge Stroobants, analyst at the Institute for Economics and Peace. “One is, of course, to take the terrorist out and make sure that he does not push the button when he wants to commit the attack. Or to just take away the idea of committing an attack of pushing the button in the first place. The only way to achieve this is to create a more inclusive society, not only here in Europe, in our bases, but also in the rest of the world, and make sure that there is more equity and equality in the rest of the world.”

Listening to the voices of ordinary citizens is crucial to improving dialogue and finding solutions said Farida Allaghi, a political and human rights activist from Libya.

“It is about time that somebody stops in order to rethink, to see what went wrong, to evaluate, to really exchange information and knowledge, to respect the people, to listen to the people, and to bring in new players – the youth! I focus on that – I am working very closely with young people and with women in Libya,” she said.

For many experts, Europe cannot win the fight against terrorism by turning into a fortress and closing its borders. Better migration management will be one of the biggest challenges of the next decades in order to deal with the millions of people expected to be displaced by war, poverty and climate change.

“Europe is experiencing a crisis of values, human values, of solidarity, and the respect of human rights,” said Mussie Zerai, chairman of the Habeshia Agency Cooperation for Development. “What we have to ask ourselves today is: can Europe still call itself a democracy while tolerating the systematic violation of human rights in neighbouring countries?”

The fight against corruption, another critical enabler of terrorism, was also top of the agenda at the forum.

But for some countries, a culture of transparency and accountability is still a distant goal.

“Our very existence proves that there is a will and an expectation on the part of the people to fight this scourge,” Simon Bolivar Njami Nwandi of the National Anti-Corruption Commission in Cameroon told Euronews. “But it is disappointing to see that, unfortunately, we don’t have the power of action. All our propositions are blocked when it comes to executing them.”

Youth, migration, security – some of the core issues that will also be discussed at the upcoming EU-Africa summit at the end of November.