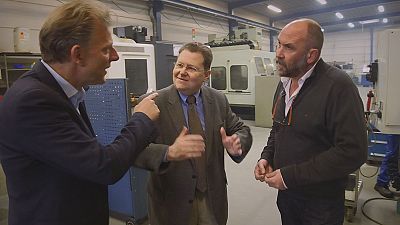 This week Business Planet visits Ghent, Belgium to learn about what’s being done to help businesses avoid bankruptcy and rebound from it.

Serge Rombi, euronews “Were here with Pol Vermoere, co-founder of a company called Dyzo that assists businesses in difficulty. Today, bankruptcies are a serious problem in Europe.”

Pol Vermoere
“Indeed. 200,000 companies each year go bankrupt in Europe, roughly 1.7 million people lose their jobs. We meet with troubled owners trying to save their businesses, and if that does not work, we try to figure out what the solutions are.”

One of the best methods to avoid bankruptcy is anticipation.

Euronews met with Philip Oosterlinck, one of Dyzo’s volunteers.

Philip went bankrupt a few years ago. He had a four-generation family business that once employed 30 people. Despite the shock, he never gave up on himself and today runs a consulting firm.

For the past year and a half Philip has been assisting business owner
Dirk Van de Velde, who has a metal parts company that employs thirteen people. Though not in financial trouble, Dirk wants to be prepared.

Philip Oosterlinck, consultant, Oxalis
“Clearly, Dirk wanted to grow his business in an organic way. For this, we conducted a financial audit and did a strategic analysis of the market. And we have, what did not exist prior in the company, and what is very important, introduced a pro-active management.”

Dirk was not disappointed to have contacted Philip. Decisions were quickly made and a positive impact was almost immediate.

Dirk Van de Velde, GM, Van de Velde Engineering
“In anticipation I mostly avoided the problems. But, I was also able to recruit two new workers and made 250,000 euros in investments. My turnover increased by 20% and I landed a very good customer. Everything’s worked out very well.”

Serge
“Pol, there is an accepted idea that must really be changed – namely, that there is a systematic link between bankruptcies and fraud. Is this true?”

Pol
“Dyzo has helped businesses for 10 years. We have helped 10,000 companies, and I can assure you, that 95% of them and their owners were acting in good faith.”

The European Commission has presented a proposal for a directive that aims to allow troubled entrepreneurs to anticipate and restructure to avoid bankruptcy.

It’s also a second chance for those who lived through this, allowing them to be released from their debts after a certain period.

Serge
“Pol, a practical question to finish: What are the warning signs and the right questions business owners have to ask today?”

Pol
“Do I pay my bills on time? Do I clearly understand the advice of my accountant? And, do I sleep well at night?”