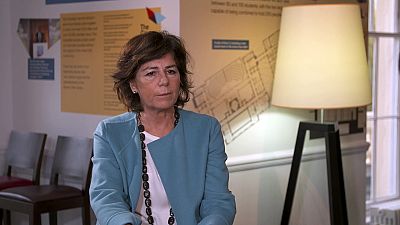 The countries that are part of the Euro Area – I think that definitely the European Central Bank should keep on providing the stimulus that has been provided. I think an exit from those policies will be dangerous – SO I hope that the ECB will not be too shy so that will keep on sustaining the economy. I think they can do so because the signs of inflation are still very weak. Core Inflation, what we call inflation excluding food and energy is still weak so I think the central Bank has the possibility of keeping the stimulus, but I also think that overall the euro area has to work on its own governance and provide an overall fiscal stimulus, which you know has been lacking in the past years so we are at a very different stage than in the U.S. I think our economy still needs a little bit of a kick.

Maithreyi Seetharaman, euronews: Do you think that kick can happen?

Lucrezia Reichlin: I am not too much worried about inflation in the Euro area. Inflation for the European Central Bank objective is inflation in the medium runs, so that it should not monitor, I mean it should monitor but it should not respond to short term volatility of inflation. So I think its very important, its very telling what the core inflation numbers are telling us and they are telling us that overall the economy still needs the stimulus and to withdraw the stimulus right now would be actually detrimental for the real economy but also for financial stability because that would be long term interest rates will start increasing and for high debt countries that would be a problem.