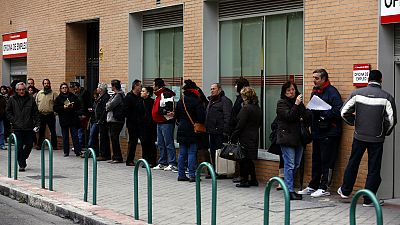 In this edition of Real Economy, Euronews looks at the fiscal drain that Europe’s long-term unemployment crisis is putting on our children, our families and our country’s finances.

We travelled to Sweden to find out what Smorgasbord of policies the Swedes use to keep their long-term unemployment low, despite an influx of people from around the world.

There are 10.5 million long-term unemployed people in Europe, creating a need for an EU-wide action plan

If long-term unemployment was a pinball game, how would you get the highest score: a job?

In most European countries only about 20 percent of employment programmes target the long-term unemployed, despite their huge numbers.

Spending is usually focused on public works schemes, and not enough is done to incentivise or involve employers.

How Slovakia is beating long-term unemployment

Euronews reporter Giovanni Magi travelled to Slovakia to find out how people can transition back into the labour market.

Slovakia is one of the European countries with a more robust economic growth rate: more than 3 percent. The unemployment rate is slightly below the average of the eurozone, but with a particular feature:

Some 9.4 percent of the workforce is unemployed, but of this amount, more than 60 percent has been inactive for more than a year: long-term unemployed.

Many have been unable to adapt to changes in the global economy.

“I did professional work in telecommunications,” Radovan Cechovic told Euronews. “As staff numbers decreased, technology advanced, so fewer workers were needed. So I was made redundant.”

“Unfortunately, my work is more male-oriented and most of the time the employer choses a man who’s usually younger,” explained Eleonora Orbanova, another worker who is long-term unemployed.

Slovakia’s government took several measures to tackle this issue: lowering taxes for low-paid workers, granting in-work benefits for long-term unemployed, reorganising the Central Labour Office; and creating sectoral councils, that involve about 1,000 human resources specialists from all over the country, with the goal of assessing the right qualifications for filling job vacancies.

Branislav Ondruš, State Secretary, Slovakian Ministry of Labour, told Euronews: “It is not possible to solve this problem without close cooperation of employers, because they are who are responsible for employment and therefore we have to listen to them, how should look, let me say, the ideal employee or what skills should this employee have.”

Long-term unemployment is a European issue. In many countries, more than half of unemployed people have been inactive for over a year. That is one of the factors behind the increase in European poverty.

“For one place there are a lot of candidates. You have to stand out, you have to sell yourself, you have to make falling in love with you the person who stands before you and is reading your resume, making him say: ‘Yes, this guy is good and it’s him what I need’. Every day you get up and you say: this could be the big day. Looking and looking, Slovakia has found me, I have found Slovakia, we liked and here we are.”

Lopez’s story is one of personal commitment and perseverance, but also one that shows how the right education and professional training, along with a better coordination between national policies and requirements of the productive world, can achieve concrete results. Even on a European scale.

Sweden’s labour programmes have always been held up as an example for the rest of the world.

Population growth has increased, which has presented a fresh challenge for Ylva Johansson, Sweden’s Labour Minister.

Euronews: “What policies worked in the past and what’s had to change?”

Ylva Johansson: “As a Swedish minister you used to say – ‘In Sweden we have a system!’ But when it comes to helping newcomers into the labour market, actually there is a lack of system. So we have to develop new kinds of strategies at the same time as we handle a very huge population that have come to Sweden last year and is now entering the labour market So, education policy is a very important part of that – continuing education some extra training, practicing, starting to work. To combine that into a fast track into the labour market. Second thing is involving the social partners, especially the unions is very important – we have a long tradition of doing that.”

Euronews: “Do you think the housing market, the labour market needs changing?”

Ylva Johansson: “Yes, the labour market is not so regulated. It’s mostly regulated by social partners in collective agreement so that’s quite flexible, but the housing market needs some big reforms and the government is working on that.”

Euronews: “What are the new ideas we can bring to the table, considering we are going to see a supply shock with all this migration?”

Ylva Johansson: “Giving the financial resources for people with a low level of education to be able to finance their adult education so they wont need to have loans. So they will have some direct money from the state so they can come up to the compulsory school level or upper secondary school level. The second initiative is to help people to finance a driving licence, because that might be the difference between having a job or not. So we will also try to help find a system to help people financing getting a driving licence.

Euronews: “What would your recommendations be to your fellow labour ministers around Europe?”

Ylva Johansson: “We are living in a world where a lot of people are running away from hell. We have to take our share of responsibility. This is I think the most important thing. We might need some reforms in the labour market. In the Swedish case for example, we have the highest employment rate in the European Union right now and we had that for many years. So something is working quite well, in our labour market. So we have to be aware that we are not destroying things that are working well. We need reforms to focus on those that have specific needs and be a little bit careful about reforms that will turn upside down the whole labour market.”

Euronews: “Ylva, on that note thank you very much for your time and those ideas and thank you for watching. We’ll catch you next time.”