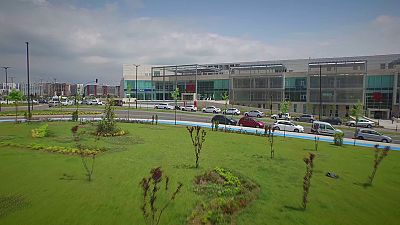 This is the second episode in our series Target Turkey.
To attract new opportunities, a large number of international companies have set up their regional headquarters and their bases for innovation in the country.

Target visited the brand new Teknopark in Istanbul where the biggest multinationals sit alongside the most innovative start-ups in the country. It’s a real ecosystem that brings together 2,500 R & D engineers, with credo, innovation and the aim of conquering new markets .

It is precisely in this spirit that an international industrial group, General Electric has installed, in addition to its factories in Turkey, its new regional research and development centre.

“We’ve just made a 20 million dollars investment in one of our factories here for power transformers. And we are doubling the space, creating manufacturing capacity. So this is a natural for us from an innovation stand point. This is why we invested in the innovation centre here, to develop products capability and more importantly, solutions for our customers,” Ash Nainar, Regional Sales Director, General Electric told Target.

And results are being achieved. Several projects for the digitization of industrial processes are emerging here, for the internal market, but also for neighboring countries.

The Teknopark is considered the new hub of innovation in Turkey. It is directly connected to one of Istanbul’s airports and also has other significant advantages.

“You have the chance to being a part of a cluster which is supported by Teknopark Istanbul and the government. And on the other hand, you have a chance to get government incentives, such as income tax, corporate tax and employee taxes which I can summarise as 50% of the taxes you could keep in your pocket,” pointed out Bilal Macit, General Manager Teknopark Istanbul.

“Many international companies believe in the economic future of Turkey, with almost 50,000 foreign-owned companies that are in the country. Turkey is also the second ranked OECD member with the most relaxed rules on direct foreign investment in the last 20 years, “ reported Serge Rombi, euronews correspondent from Istanbul.

In the last 10 years, the US drinks giant Coca Cola has invested close to $1 billion in Turkey. The company has made it its operational epicentre for Turkey and eight other countries of the region.

Of course, the geostrategic position as well as the dynamism of the internal market are at the origin of this choice. But that’s not all.

“The talent that we have in Turkey is well trained, first of all. Well educated. But most importantly, they have the muscles to think strategically in volatile environments. Short term thinking and long terms actions, doing it in balance has always been very important and this is one of the unique values that Turkish talents bring to the world,” explained Galya Frayman Molinas, Business Unit Manager, Coca-Cola Turkey,Caucasus and Central Asia.

An economic dynamism, and a strategic framework conducive to innovation: Turkey hopes to further deepen its network of investors!