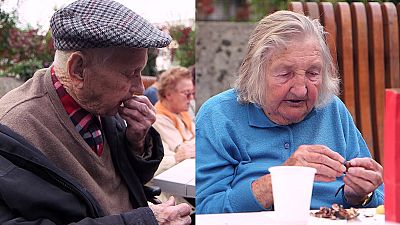 The tide has definitely turned against Europe’s population – making it increasingly ‘grey’. That’s the theme in this edition of Real Economy.

The shifting age demographics will increasingly challenge our healthcare systems in the future.

#EUFACT by 2030 healthcare for Aging population will be a fiscal risk for 16 EU Countries & we'll be down to 2 working age ppl per retired!

Here’s a quick crash course on exactly how old Europe is set to look.

By 2060, Europeans will have more babies than today – but it won’t be enough to make up for male babies living longer as well as females.

While net migration will continue it is expected to fall after 2040.

The result is that older Europeans dependent on a younger working population will double in number over the long-term.

So, after 2023 the labour supply in Europe will start to fall, with a drop of nine million workers by 2060

The picture is clearer when you break aging down into three periods. Between 2007-2011 the working-age population grew but employment was sluggish.

Between 2012-2022 employment for younger people will improve and offset all the baby boomers retiring.

But from 2023 onward an older population means both working-age population and the number of persons employed will start falling.

More elderly people means higher healthcare costs and long-term care spending will become a fiscal sustainability risk for 16 European Countries, both in the medium and the long term.

If you look at just age related expenditures that is set to rise by two percent of GDP by 2060.

Slovenia is one country which has carried out a review of their health care systems.

Franci is 79 years old and a resident in a home for the elderly. “I am very active, I ride my bike, I ski, I drive my car, I go hiking. I pay 660 euros a month for a room with my own bathroom. I don’t have any extra expenses or needs,” he explained.

Unfortunately, not all seniors are as healthy as Franci, and as they get older taking care of them means bigger bills for Europe’s families and healthcare systems.

“They have to pay on their own, if they can’t, their kids have to take care of them, in the worst case scenario, if no one has the money, then yes, the government pays for them,” Natasa Schwartbartl, a social worker at the Nursing Home Ljubljana-Siska, stressed.

“According to projections, the EU population is expected to rise by three percent in the coming years. But there will be 60 percent more senior citizens by 2060. They will need to be cared for, occupied, entertained, and that means more jobs,” reported euronews correspondent Guillaume Desjardins from Slovenia.

The country’s reliance on payroll contributions toward a compulsory health insurance system makes it susceptible to labour market fluctuations.

Sustaining healthcare here and across the rest of Europe means the focus now is on prevention methods like early cancer detection, long term care insurance and integrated care.

“Slovenia is already working on the question of how to absorb the extra costs implied by the age pyramid. The ageing population could cost the EU up to 1.4 percent of GDP by 2060, and up to 6.8 percent for Slovenia alone,” Guillaume Desjardins pointed out.

Natasa will join the ranks of the retired in the next few decades and she and others like her will need a system that can bear the weight of a larger older population. To cope, burden sharing between the government and citizens seems inevitable.

In Slovenia the public healthcare system is now partially privatised, with new homes for the elderly no longer subsidised. In other EU countries the retirement age is being pushed further to adapt.

“We will not be able to solve this issue without immigration. We have to find a strategy how to attract people from abroad, to work and stay in Slovenia. To live and work and then retire in Slovenia of course,” explained Boštjan Vasle, director of IMAD

How we become a silver economy with potential is the policy challenge of today. Because one thing is for sure, Franci, his friends and all of us are undeniably getting older.

Euronews correspondent Maithreyi Seetharaman spoke to Pedro Barros, who is Professor of Economics at the Nova School of Business and Economics in Lisbon.

Euronews: “What does the Portuguese healthcare reform really show us about implementation. What are the lessons for Europe as a whole?”

Pedro Barros: “Well, our experience shows that it is difficult to make those reforms. It takes a long time. Even creating a new network for long-term care as we did within the NHS takes at least 10 years. We are still half way through doing it so it’s difficult to understand exactly how to deploy things, how to make people make adherence to the new ideas and to have professionals and all the elderly people cope with the new transitions to different models of organisation. That’s the biggest challenge.”

Euronews: “Is it transferable across Europe, because the health care systems are very different?”

Pedro Barros: “Yes, certainly transferable in that we’re going to cope with this diversity of ideas about diversity of preferences. People are going to be the main challenge. Probably going to re-organise things not about hospital care or hospice care but basically about having people in their homes with a primary care that has a network of other professionals. They can be not only medical professionals but will probably be nurses, probably physiotherapists, these other sort of professions.”

Euronews: “Well that sounds like a lot of opportunity out there for business and also for economic growth through healthcare reform.”

Pedro Barros: “Sometimes we go too much on organising people’s lives but if we give them freedom for them to choose with alternatives they’ll probably not choose the more expensive one. So financially it will help. We’ll get opportunities to have new ideas and test new ideas and probably even involving patients or elderly people in the making up of their solutions will be something to look for new business for example.

“We have started seeing some of these things. There are a few companies that are trying to provide assisted living devices and help monitoring people and we have to integrate this in a way into the NHS. Then more opportunities will be there for that.”

Euronews: “Alright, that’s opportunity, but what about the risks when it comes to extended long-term healthcare costs?”

Pedro Barros: “OK the nice thing about it is if you think in organisational mode you can actually change things in a way that you spend less. Typically one of the risks is falling at home. But if people prefer to be at home and bear that risk probably getting them some accompaniment, having people seeing them or phoning them and checking how they are probably is less expensive than putting them in a particular institution where they have 24-hour seven-days-a-week care.So there will be risks but I don’t think there will be major financial risks if you accept the new vision.”

Euronews: “So, do you think we across Europe are looking at the issue in the way we need to be?”

Pedro Barros: “Well its difficult to get one policy that fits all of them. But probably having a new vision for healthcare that can be shared across all countries will be the starting point for that and policies can unfold. Probably thinking about what people want in their elderly years, how they want to be treated and what kind of care they want to receive is the first important point.

“So if you have a vision that says people should also make an effort to be healthy and to think about the system where they are inserted that the system is worried more about catering to their preferences and their needs instead of thinking of the system itself, that’s probably the best policy I would say.”

Vision For a Healthy Aging Europe