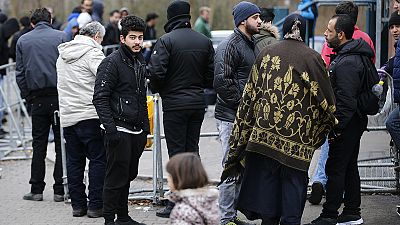 Asylum rules in Europe can cause confusion about the economic impact because it is often difficult to distinguish between genuine refugees and economic migrants, so here is a crash course.

In the short term, the extra spending increases the country’s aggregate demand or fiscal expansion. That means more goods and services are produced, resulting in more disposable income for native workers.

That makes up for downward pressures on wages and inflation when the asylum seekers finally enter the job market. The process can take up to two years depending on different rules of countries.

When they can start looking for a job, newcomers tend to fall behind native workers.

To narrow the gap – it is important to quickly increase employability.

That means providing housing closer to work, and flexible labour markets, as well as providing language skills and education.

With many of them staying in, or travelling through Greece, Hungary,Italy, France, and six out of ten heading to Germany where the open door policy has both its supporters and detractors.

Euronews correspondent Giovanni Magi headed out to find out if the country is prepared to make this a long-term investment.

The big challenge for German companies such as technology giant SAP is transitioning refugees into the jobs market.

First steps for people such as Nasser from Afghanistan and Mohanad from Syria — who now call Germany home — include internships that re-train them for their new environment.

“The first difficult thing is German language,” points out SAP intern Nasser Atif. “They have to do these courses until they are on a level to be accepted in a labour market and also the culture is different, I mean everything is different.”

“I did marketing in my country, for a ceramic factory, I thought we are doing some modern business but, I mean, [here] it’s light-years away from what we did over there, there’s a lot to learn,” says SAP intern Mohanad Alfar.

SAP’s head of recruitment Uli Joos says up-skilling is not an issue.

Many refugees arrive with marketable skills

Germany needs that talent to fill one million vacant jobs, some 685,000 of which require skilled workers. Refugees such as Hussein Shaker from Syria fit the bill.

Hussein arrived in Berlin with a tech degree and started up online jobs portal Migrant Hire.

Out of more than one million refugees who arrived in Germany over the course of a year, 21,400 have found jobs, but only around 100 were hired by the 30 largest companies. A small part that does not affect the workforce aspect destined to shrink by several million units in the next few years.”

Refugee arrivals this year will generate costs of about 10 billion euros, rising to 20 billion in 2020 .
To pay, the government has earmarked 6 billion euros a year for the next two years. That’s half of the 2015 budget surplus. As the costs mount, companies are calling for a more efficient refugee policy.

“We also need to succeed amongst the variety of programs and initiatives, to determine the most successful ones, then also to roll out, to unfold and to broaden them,” says Stefan Küpper, Managing Director, Arbeitgeber.

That is key to the economic integration of refugees — who tend to be of working age — into one of the fastest aging populations in the world.

The German example raises a heck of a lot of questions about the long-term which Ian Goldin can answer. He is a world renowned expert on migration, the author of The Age of Discovery, and the founding director of the Oxford Martin School at Oxford University.

Maithreyi Seetharaman, Euronews: “Ian when we talk about the German example and refugees, fiscal costs always come up. How do the Germans make sure that this is a long term investment rather than sunk cost?”

Ian Goldin: “It’s both a short term and a long term investment. In the short term it provides stimulus to the German economy which will grow about 0.2 percent faster than it would have without the refugees.

“In the longer term – there was a situation with one of the lowest fertility rates in the world in Germany and that will be vital for the long term sustainability for the German Economy.”

Euronews: “Well you always hear there is a lack of empirical evidence that is possible.”

Ian Goldin: “Google would not exist without Sergey Brin, a refugee. Steve Jobs was the son of a Syrian refugee. If you give people the ability to work them the education they need for the skills, the transferring – the recognizing of their previous degrees, the adaption to your own systems.

“Ensuring they have the ability to integrate into labour markets – know about jobs, can get to the places, can get housing – that is vital. we have lower dependence ratios amongst refugees than the population as a whole. Those countries that integrate them effectively do really well and those where refugees are not allowed to work, where they are put into ghettos and they are unemployed is where you have the troubles.

Ian Goldin: “Yes, and we see that in the politics – this rejection because of a feeling of a threat, Germany has a labour shortage and very low levels of unemployment so if you have high unemployment one has to worry much more about this.– what Sweden’s been doing is quite remarkable in relationship to its population size. And knowing that people are going to take jobs that locals wont do. Interestingly enough, even in Eastern Europe for example there is a massive labour shortage in certain skills.”

Euronews: “What can refugees do then to alleviate the worries of people who are going to host them?”

Ian Goldin: “Their ability to learn the local languages, to ensure their skills are applicable, to respect the customs and laws of the country they’ve arrived in is absolutely vital.
Many of them work in occupations where they are over-qualified to do the jobs. But I think accepting that it takes time, accepting that it is difficult for the host societies, there is an adjustment process for both sides in this and that
over a period of four or five years one will see the real breakthroughs if the host society is prepared to make the necessary efforts and the refugees are.”

Cost of Refugees: humanity vs economy

Economic and social responsibilities of refugees