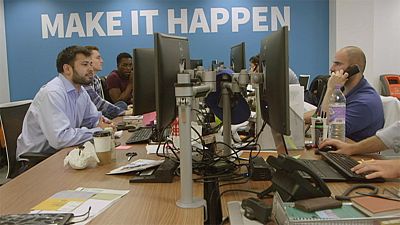 This week, Real Economy is looking at the world of microfinance in a European market that tends to be dominated by traditional banks.

We take a look at the world of microcredit in Romania and see how small loans and a little financial training can make a difference.

We’ll see how the model is adapting with technology to the needs of people and businesses in western Europe who can no longer tap into traditional credit from banks.

Then we’ll check in with the European Investment Fund (EIF) about how best to use microfinance in our search for sustainable employment and growth.

Microcredit and microfinance are usually terms we associate with underdeveloped and developing countries. But in Europe it has the potential to fill a big gap in the financial services that businesses need, as do people on low incomes.

So here’s a quick crash course.

Victor was once a part of the banking wheel. His earnings, assets and creditworthiness allowed him access to traditional financial services.

He fell off that wheel when he lost his job and started to work in the informal sector.

With no credit or collateral he got the chance to hop onto the smaller wheel of MFI, or Microfinance Institutions. These give microcredit and microfinance services to people on a low income.

Riding that MFI wheel helped Victor borrow money for personal use, such as rent, emergencies and education.

The wheel also turned for him when he needed to borrow a small amount to start a business.

MFIs also offered more than just microcredit or loans to Victor. They gave him access to broader microfinance services including savings, insurance payments and remittances.

The microfinance wheel gave Victor what he was looking for in terms of services and loans he needed, which traditional banking couldn’t offer him.

Now 79 percent of those microloans went towards business use, while 21 percent went towards personal- That’s a little less than 2011.

In Eastern European countries like Romania, this kind of microfinance has become a lifeline. It has years to mature, as there is a lack of access to formal banking.

But it’s the small differences that are now adding up, as Guillaume Desjardins explores.

Rudolf Florea has a gift. He can’t play the cello, but he sure can make them.
However, wood and tools are expensive and it is difficult to get the money together before starting to make one. So he turned to microfinance to get kick-started.

He received a total of 13,700 euros in two loans to develop his workshop.

Wood for cellos is expensive, but Rudolph was able to buy some thanks to his #microcredit#Romania#RealEconomypic.twitter.com/FL3R8nnhxj

“The other banks asked us for a mountain of papers. As we had just started, we were not making enough sales to prove we could reimburse the money. (…) The FAER foundation gave us a chance and offered us microcredit, based on the sales and income we had at the time,” he explained.

Microfinance also exists in western Europe, where the loan sizes are actually bigger. But here, although the amounts borrowed are smaller, more people can benefit from them. And, in today’s economy, that makes all the difference.

Chairman of the FAER Foundation, Ioan Vlasa outlined the importance of the loans to those borrowing money.

“For loan beneficiaries, there is a big economic impact, because it means they are able to survive,” he explained. “They are able to live their lives properly, to develop over time. They can develop, little-by-little, growing professionally, economically and one day they’ll start bringing in the money.”

Dairy Farmer Dumitru Vlasa is one such recipient. Throughout the year, he received five loans to invest in his farm and tractor. But he also received something extra…

“I attended the courses organised by the foundation. They even had training here, in our village,” he said.

“Several farmers were there and so was the foundation, to give professional training on the topics we needed to study (…) The training was really useful.

Along with #Microcredit, Dumitru was able to attend training sessions to improve his project. #RealEconomypic.twitter.com/4CjEBICvPJ

Of course, microfinance alone will not cause a boom in eastern European economies, but for entrepreneurs like Rudolf or Dumitru, a few thousand euros made quite the difference.

To help raise the money that is now needed the European Progress Microfinance Agenda is now being followed up by the EaSI guarantee. All of this is managed by the European Investment Fund (EIF).

We caught up with the CEO of EIF, Pier Luigi Gilibert, on his findings in terms of microfinance across the continent.

“What has changed in the nature of the market has been the crisis of 2007-2008. A lot of people that could not find a job in the traditional sectors thought about becoming self-employed. They had little chance to access traditional banking channels,” he explained.

“And after that the same theme applied to social and economic inclusion not only of unemployed but for instance women entrepreneurs or, maybe today or tomorrow, migrants. So it is a tool which can address relatively large number of issues.

“We believe that across the 28 member states the unmet needs for microfinance are in the range of 5 or 6 billion.”

We asked:
“Do you think that something like legislation, or subsidies from member states, is going to encourage further growth in microfinance?”

“The EIF or the EIB are present where the private sector is unable for different reasons,” Gilibert responded.

“Normally what we do is to provide the seed capital for this sector to develop and then maybe step back if and when the private sector picks up the action.

“It is very costly to make a due diligence and to process a very small loan, below 25,000. There are fixed costs that are independent of the size of the loan.

“It makes sense for a bank to process a loan, say, of 1 million which costs 1 percent, but to process a smaller loan is very costly. So, banks are not particularly keen to do so. That’s why some form of public sector support is always needed between western or eastern Europe.

It’s become so difficult for small businesses and people to borrow money from banks that it’s putting new focus on crowding in private resources.

It’s changing the way financial institutions and MFIs think. As is technology, and that’s opening up new frontiers for microfinance, like crowdfunding and crowdlending. But, the money isn’t micro anymore, as Fanny Gauret reports.

The bank lending market in western Europe is a sophisticated affair. Since the 2008 crisis, new funding models are growing online. Through rewards, equities or loans, they are compelling change in the credit market.

These alternative financial services allow people like you and me to become investors for small businesses.

The bank turned down small-business-owner Nicolas Rascle when he was looking for a loan to grow his enterprise. So instead, he sought a loan from Funding Circle, an online peer-to-peer lending platform for SMEs.

“They came out with a solution and within like a week or two the money was in the bank account,” he said. “The interest they are asking for is slightly higher than what a bank will ask for, but in that case it is pointless to talk about the bank because they don’t want to help us.”

So, individuals and businesses lend directly to borrowers. This system builds capital, mostly through small lenders, by offering attractive returns.

Robert Wardrop, the Executive Director of the Cambridge Centre for Alternative Finance, explained the attraction of the alternative channel.

“[It] provides an opportunity for those firms to access capital. Because these new forms of financing, are less costly to operate than the banks, that have traditional infrastructure,” he outlined.

There are, of course, risks for the lender’s money. But Funding Circle is partially regulated by the UK authorities to protect its users and SMEs asking for £5,000 – £1 million have to go through a process.

Its Global Head of Communications, David De Koning told us the requirements for applying to Funding Circle.
“[Your business] needs to be at least 2 years old, you need to be a well-established company. We have a manual credit assessment team and they would give that application a risk band, from A to E. Alongside these bands are interest rates, and then from here, the business is placed onto the marketplace.

“And investors, either individuals, institutions, or even the British Government choose then to lend directly money to businesses.”

Wardrop added:
“Microfinance institutions historically have not used technology to a great degree. What the technology enables them to do is to scale that activity, much more broadly, much more efficiently, that they can do it offline.”

The UK’s alternative finance industry is the largest in Europe. And that’s down to a more flexible regulatory environment.

Finding a balance between innovation and protection, as in the UK, could be key for microfinance to help projects like Nicolas’ to become successful.

So what does crowdlending in private resources mean for small businesses on our high street, or for the future of microfinance?
“Certainly there are signs that indeed lending platforms, crowd funding peer -to-peer lending could become much more important,” said Gilibert.

“Such platforms are able to reduce the costs which is one of the main difficulties in making this industry a self-sustaining one.”

We asked:
“Do you think there is a chance we miss out on doing the social inclusion if we go down the FinTech way?”

“Yes, you are right! It is difficult to have a self sustaining microfinance industry without the mentoring side. And this is part that is not addressed by these new FinTech initiatives.”

euronews:
“Have enough lessons been learnt within the microfinance industry to avoid the non-performing loans or the other risks that commercial banks don’t want to take?”

If you are looking for finance