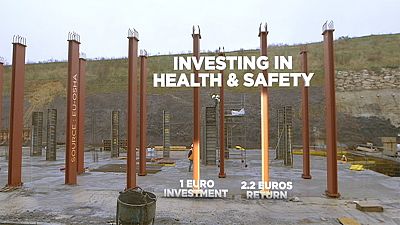 We have all been guilty at some point of ignoring Health and Safety signs, on the road or in our offices and places of work, but it does play a role in our economic growth.

So in this edition of Real Economy we head to Spain to understand the economics of health and safety with the European Agency for Safety and Health at work, better known as OSHA, and look at an industry which sees the biggest issues.

Then we will go to Belgium to understand how companies and employees are innovating to ensure that we are not just physically fit but also mentally prepared to work in challenging times.

Why does Health and Safety matter?

The goal, of course, is to prevent us from leaving a job or taking sick leave because of issues at work, but Health and Safety also addresses issues of adapting work to our skills and abilities, and taking care of our physical needs. It also includes taking care of our overall well-being at work.

So how does that tie in with the economy and growth? Lets find out.

Our case study is Philip, a butcher who employs 25 other butchers, and because he efficiently adds value with speciality cuts and delicatessen lines his business productivity is high.

The more he sells the higher taxes he pays, contributing to higher overall national economic growth.

But Philip has not implemented health and safety rules as he thinks they are expensive.

Accidents and illness start rising, with an average of two or three of his employees out on sick leave.

Philip’s productivity drops but he still has to pay his workers salary, compensation and cover medical costs.

Wear and tear on plant remains the same, and he has to train replacement workers which also costs time and money.

With less to buy clients leave and morale among employees falls, causing a further drop in productivity.

Sick and injured workers see a fall in earnings and their standard of living.

This puts the burden on their family and friends who take care of them.

Costs to the overall economy mount as workers need social financial support along with medical treatment.

Society and the economy then sees further losses as productivity falls at businesses like Philip’s which also leads to lower growth. It is a vicious circle

Health and Safety is good for you

In Europe we lose an estimated 83 million days a year because of accidents at work. Three quarters of us will take a day off, but almost a quarter take more than a month.

Then there is the 367 million days lost in sick leave because of work-related diseases. That is a lot of lost productivity.

So, funded by the European Social Fund, the new Strategic Framework for Health and Safety at Work for 2014 to 2020 aims to try and address Europe’s challenges, an aging population, better implementation of current rules and the prevention of work-related diseases.

Euronews’ Monica Pinna trekked off to Bilbao in Spain where the European Agency for Safety and Health at Work is based, to find out how and what can be done, right now.

Occupational accidents in Europe represent a heavy economic burden that is still difficult to quantify.

The estimated cost in 2000 was 55 billion euros, (ILO, 2006), and it is still high today. Preventing this should therefore make economic sense, especially in sectors like construction, where accidents are still hitting hard.

Clamping down on Construction

This industry accounted for 26.1 percent of all fatal work accidents in 2012. In Spain, the figures are still worrying.

About 2.5 million people in Europe suffered from a non-fatal workplace accident in 2012. There were over 3,500 fatalities.

This means there have been on average 2.44 deaths per 100,000 people employed. Variations from country to country can be considerable. They ranged from over five per 100,000 in Poland to less than one in countries like Germany, Denmark and the Netherlands.

Many studies have proven that workplace accidents and occupational illness can impact not only the economic performance of businesses but also a country’s economy. We met the Director of the European Health and Safety Agency in Bilbao.

“The countries in Europe, many of them have their own methodology to calculate the costs. Germany for example. Their calculation is that poor occupational safety and health leads to a loss of 90 billion euros and that means more or less 3.2% of GDP,” says Christa Sedlatschek.

The global GDP loss due to occupational accidents and disease has been estimated at around four percent. In Europe this would range from between 2.6 percent and 3.8 percent annually.

Case studies demonstrate that Health and Safety should no longer be seen as purely a cost. Investing one euro in well-being at work can produce at least 2.2 euros return.

Cold, wet and windy, but we made it in #Bilbao first day filming #real economy on Health&Safety pic.twitter.com/rQmiN7g4Nr

In Bilbao we visited a workplace supervised by the public company Visesa. The Regional Head of Health and Safety explains the potential benefits of investing in prevention for a business like this.

“H&S costs for this worksite are about 288,900 euros over two years. The safety measures to be applied imply a reduction of the possibility of fines and of production delays. For example stopping production in this work site would cost 3,500 euros per day,” says Maite Prieto.

European legislation provides a binding framework, but its implementation differs from country to country, by sector and size of enterprise.

The difficulties we found in Spain mirror the ones found in many other member states says Maite Prieto: “SMEs, that represent the majority of businesses in Spain, don’t have H&S departments, they have no specific employees for that. Therefore there is no H&S culture, with companies often not knowing the requirements or how to apply them”.

In addition to accidents, in Europe exposure to hazardous substances at work is believed to contribute significantly to mortality through carcinogenic diseases. It is estimated to have resulted in a global disease burden of 152,000 deaths in 2000. Potential negative effects include costly early retirements, loss of skilled staff, high medical costs and insurance premiums.

“The calculation on occupational cancer shows that it costs almost one percent of the GDP in UK,” says Christa Sedlatschek.

Putting an end to the ‘sickie’

No less than 8.6 percent of the workers in the EU reported a work-related health problem in the past 12 months. This corresponds to approximately 23 million people. Musculoskeletal problems head the list, followed by stress, depression or anxiety.

You would never know looking at all the seemingly relaxed people around you that mental health issues cause one fifth of us here in Europe to either quit or change jobs. It also costs companies twice as much as simple sick leave and causes five times the number of accidents.

It also costs 240 billion euros a year, 43 percent of that coming directly from medical treatment costs and 57 percent from productivity losses.

Real Economy’s next stop was in Belgium to see what is being done by employees and companies to address our overall well being.

Work-related stress and psychosocial risks are responsible for almost half the number of working days lost each year. Absenteeism due to stress, depression and burnout is growing across Europe.

This is now the second most common workers are absent for more than three days in a row. Our offices are revealing themselves to be trickier places than people might imagine.

Is your office bad for you?

“There are multiple stress situations in a multi-role job. Stress from phone calls at any time, clients and colleagues that need help, and at the same time working through lists of things to do, lists that seem to get ever-longer, and seeing those few moments in the day when you could take a breather slip away as work piles up,” says Product Manager at Siemens Healthcare François Richir.

The main issue for addressing psychosocial risks seems to be the taboo that still exists in about 30 percent of European establishments to talk openly about these issues. This reluctance grows stronger the bigger the company.

This seems not to be the case at Siemens Belgium where the group has bet not only on Health and Safety but also on the employee well-being. The company has won an EU-OSHA award for its good practice in stress and psychosocial risks management.

“The Fit@Work programme is a health promotion programme to obtain a healthy lifestyle with our people. We have the health and nutrition, we have physical exercise and also you have the mental aspect, the psychosocial aspect,” says Siemens’ Environment Health and Safety Manager Patrick De Bouvier.

It’s all in the mind

François, like about half of the 1,500 employees of the company in Belgium, takes the time to do his training every week at work. Not only abs, but also coaching sessions including stress management. All this is part of a plan, with the company investing approximately 500,000 euros over three years in 2013.

“Why did we start it and what do we get back after a couple of years of doing it? It’s a really difficult thing to say. It has been proven that caring about the well-being of people helps in so many fields that it really is a plus for the company. You believe in it or you don’t,” insists De Bouvier.

Improving working conditions in Europe is still an issue. More than half of all workers work at least one Saturday per month, (52 percent), while 45 percent say that they have worked in their free time in order to meet work demands in the last 12 months, with three percent doing that on a daily basis.

Back at the European Agency for Safety and Health in Bilbao, we asked Christa Sedlatschek if she could give us a bigger picture of the problem in Europe.

“We see that in Europe 80 percent of managers are aware of the risks and they have enough information, but only 30 percent of the companies take measures. So there is a lack of implementation of measures related to psychosocial risks. Four out of 10 workers say it is not handled properly at a company level,” she says.

Brussels aims at improving enforcement of the European legal framework. So far just slightly over half of the establishments surveyed in Europe report having enough information on how to include psychosocial risks in risk assessment. Without this data we will struggle to build a healthy work environment.

Who is doing well in Europe for Health and Safety?

What to do to improve H&S implementation?