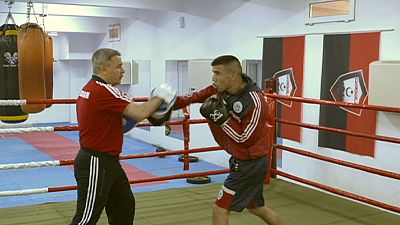 Javid Chelebiyev is the reigning bantamweight world boxing champion. It automatically makes him one of the contenders for the gold medal at the first-ever European Games which are to be held in the capital of Azerbaijan from June 12th to 28th.

The young boxer is convinced that with each workout, each combination of punches that he polishes to perfection with his coach, he makes another step towards his dream – to become the champion of the first European Games in history.

“At this level it’s extremely important to be prepared mentally. Also of critical importance is experience. I won the Boxing World Championship, so I have these essential qualities. And I’m ready to win at the upcoming European Games,” smiles Javid confidently.

The European games are organized under the direction of Europe’s Olympic Committees and are recognized by the International Olympic Committee, similarly to the other continental multi-sport events that already exist, such as the Asian, Pan-American, Pacific and All-Africa Games.

And, despite being a new event, this tournament can already boast some highly decorated participants.

“From the provisional entries we have well over 100 Olympic champions across all 20 sports. Out of those 20 sports 12 are the Olympic qualifications. So it means the best athletes in Europe will have to come to Baku to secure their places in Rio. So we don’t have any doubts that we will attract the best athletes in Europe,” says Baku 2015 Director of Sports Pierce O’Callaghan.

Baku has not had long to prepare for what is its first high-profile international event, and the preparations have meant some summary evictions and site works that have angered some, but the European Games’ imminent arrival is making hearts beat faster, not only for the competitors, but the event’s organizers as well.

In two and a half years the Azeris have all but moved mountains to be ready. But are they?

“I’m reasonably relaxed,” says Chief Operating Officer Simon Clegg, once he can stop an outbreak of nervous laughter. “Though it doesn’t mean that we don’t have issues going on, of course we have got some issues going on. This is a major international operation we are staging here.”

Equally excited is the artistic director of the Opening ceremony Dimitris Papaioannou.The creator of the show for the 2004 Olympic Games in Athens, he again has to grapple with a race against time while trying to make his creative ideas a reality.

“What we are creating now is very impressive. We are really transforming the landscape of the stadium. it’s a big deal. I think you shoudn’t worry about impressions. I worry how poetic it going to be. I think the challenge is to create human stories that compound the ingredients that are characteristic of the local culture. This is my aim,” says Dimitris.

More than 80% of the tickets for the opening ceremony are sold, despite the fact that they are the most expensive for the upcoming European Games – with a maximum price equivalent to just over 170 euros. Monthly wages average around 400 euros.

“We have in total 600 000 tickets available for the whole event. The cheapest one is 1 manat, which is in the standing area for the canoe sprint, and 1 manat for kids for the competitions at the Heydar Aliyev and National gymnastics arenas. The most expensive pass for the sport event – for the finals – has the price of 5 manat,”* says the Head of Ticketing Mirjam Bogataj.

After generous investments and intensive and laborious preparations Baku has earned the claim to be Europe’s sports capital. In just a few days – on June 13th – the first 13 of 253 sets of medals for the debut European Games will be at stake. More than 6,000 athletes from 50 European countries will strive to make a little piece of history.