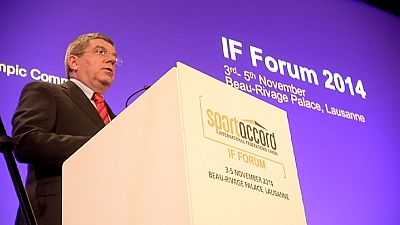 ‘‘If we want to carry on being successful, we have to be proactive, we need to prevent potential problems, rather than trying to solve them once they have occurred’‘. These were the words spoken by the IOC President Thomas Bach at the opening ceremony of the SportAccord International Federations Forum in Lausanne. Innovations and technologies were the key issues discussed throughout this 8th edition.

Five-time Olympic champion Nadia Comaneci, who made history with her ‘perfect 10’ performance in Montreal in 1976, was quick to highlight the rare mishaps which could change the sport. The Romanian sensation was only 14-years-old when she became a global star in Canada.

With the rapid development of technology, impeccable coverage of sport events has become a key issue for the industry. This relatively new way of thinking doesn’t only apply to popular sports. This is one of the reasons why the president of SportAccord Marius Vizer was pleased to announce his partnership agreement with Euronews.

Nowadays sports officials also have to think about attendance in stadiums and playgrounds. Fans feeling more involved will help to pack arenas, according to Paul Hawkins, the inventor and Managing Director of Hawk-Eye Innovations.

Thomas Bach clearly stated that changes would have to be made in international sport while this SportAccord forum has provided us with numerous ideas as to what these changes might be.