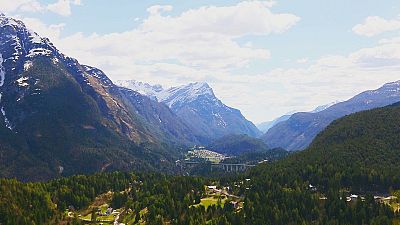 In the stunning Cadore Valley in the heart of the Italian Dolomite mountains, for many years, the local economy thrived from making glasses but the sector hit an economic crisis ten years ago forcing people here to innovate. So a cooperative was formed which has developed a profitable tourist industry, using a system of social franchising.

There are now 160 members of the Cadore Valley Cooperative, which, since 2011, has developed and boosted the eco-tourism offer here to include flats to let, restaurants, museums and sporting activities.

Claudio Agnoli, the founder of the Cadore Social Cooperative, said: “We needed to create jobs. So we needed a real strategy, we had to set up a network which would mean we could use a social tourism project to add value to our offer on the international market.”

So the cooperative developed projects using a social franchising system. Today it has turnover of more than two million euros per year. And the Cadore Valley appears in many of Europe’s tourist catalogues.

The social economy today represents around 10% of European GDP, 6% of jobs and is still growing. That’s why it’s important to understand how social franchising works. Of course it works like ordinary franchises, but with a twist. For example in this case, LE MAT, the franchiser, is an NGO specialising in tourism, which has a vast network of experts. Its aim is to help each new franchise holder with the various steps: making a business plan, getting funding, or setting up new processes and services.

Renate Goergen, the president of LE MAT said: “Some people need an architect, others need to do marketing, built a website, or train their staff for example.”

The objective is to create jobs for socially excluded people. This is the case with the Cadore Valley Cooperative – where they represent 30% of workers.

Renate Goergen says it works well: “We are convinced that marginalised and/or disabled people can be really productive. It’s not only a question of money, it’s a question of enriching society by using all sorts of talents.”

Claudio Agnoli said that the keys to success are being in osmosis with the land you live on, constructing a strong identity through your work, and transmitting that to the entire world.