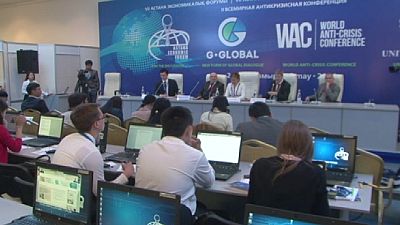 Astana, Kazakhstan’s gleaming brave new world capital, is where the hosts, along with Russia and Belarus, sign the Eurasian Economic Union (EEU) into being on May 29.

This post-Soviet integration project, so dear to President Vladimir Putin’s heart, seeks to replace political ties with economic ones.

With just days to go before the signature of the founding treaty of the EEU it is high time for an economic forum, as there is a new player in town.

Kazakhstan as well as Belarus have signalled they have no intention of ever again losing their independence, and that this is all about business. Kazakhstan will not cede its sovereignty to anyone.

“We’ll not be back in the former Soviet Union, in the USSR. We are creating a purely economic union, based on purely pragmatic
principals. What we want is a growing economy and our businesses developing. We want investors to come to us and we want eventually to increase the size of our GDP,” explained Kazakhstan’s Deputy Prime-Minister, Bakytzhan Sagintayev.

Russia started to form a regional economic partnership with Belarus, Kazakhstan, Ukraine and the Central Asian states at the beginning of 2000. The global crisis of 2008-2009 stimulated the convergence of three countries, mutually dependent on oil and gas supply , Russia, Kazakhstan and Belarus.

In 2010 they formed the basis of the future EEU, a customs union aiming to bolster mutual trade through the removal of customs barriers, something which should be good for business.

“A number of famous brands came to Kazakhstan and brought direct investments. They are interested in access to the common market of the custom union of over 170 million people, with GDP of 2.2 trillion dollars, or 1.6 trillion euros,” says Rakhim Oshakbaev, the Deputy Chairman of the National Chamber of Entrepreneurs of Kazakhstan.

But there is a rival project in the same area, the European Union’s Eastern Partnership is directed at post-Soviet countries including Belarus.

But it could be difficult to avoid geopolitics. With more than 50 percent of its trade with Russia, Belarus and Kazakhstan, Ukraine was a key cog in the Eurasia programme over the last decade.

Russia offered 15 billion dollars, or 11 billion euros, in credits and lower gas prices to persuade Ukraine to drop an EU trade accord. This conflict over Ukraine’s choice between East and West drives the current crisis in the country.

And now Ukraine “has too many different economic interests” to became a part of the Eurasian project in the opinion of Tatyana Valovaya, Russia’s Minister for the Eurasian Economic Commission, the coordination body of the future EEU.

“I think that the Eurasian Economic Union could not have been born without Ukraine, but perhaps with Ukraine as a member this organisation might not work well, So maybe it’s better, not worse that Ukraine now is no longer a part of this Eurasian integration project,” said Valovaya.

But the door is open. Armenia and Uzbekistan also have pledged to join. Much poorer Tajikistan and Kyrgyzstan say they would love to, but cannot, yet. The Eurasian Union officially comes into operation on January 1, 2015.

Reporting from Astana euronews’ Natalia Marshalkovich concludes:
“So at the beginning of next year a new union will be born. It’s already open to future enlargement but participants at this Astana forum advise against being too hasty, taking into account the European Union experience.”

Debating the challenges of the global economy