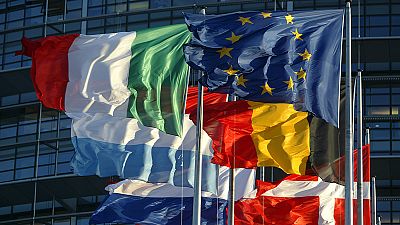 Real Economy goes to Croatia, just 10 months after it joined the European Union, to see if enlargement is more than simply a one size fits all prosperity dream.

The Governor of the Croatian National Bank talks about facing into tough economic headwinds. We also ask if EU membership is morphing economic mindsets, and look at evolving relationships in the region, from a Serbian point of view.

The EU story so far

In 1957, Belgium, France, Italy, Luxembourg, Netherlands and what was then West Germany created the European Economic Community. In 1973 Denmark, Ireland and the UK joined, and in 1979 the European Parliament was directly elected for the first time.

Greece joined in 1981 and the Schengen agreement was signed in 1985, the same year that Greenland left the Community. The next year Spain and Portugal joined.

And after reunification 1990, both East and West Germany, belonged to the club. Then Austria, Sweden and Finland joined. And the so-called Big Bang Enlargement in 2004 saw 10 new members (Cyprus, Czech Republic, Estonia, Hungary, Latvia, Lithuania, Malta, Poland, Slovakia and Slovenia). Romania and Bulgaria belatedly joined in 2007 and last year, Croatia became the 28th member state of the EU.

Just 10 months after joining, Croatia is the youngest member of the EU. In its fifth year of recession, unemployment is rising and inflation is falling due to weak domestic demand. Both public and private sectors are flagging, so the overall picture is not economically rosy. But this country sees EU membership as a way of moving forward from the wars of the 1990s to shared economic development.

The aim now is to attract foreign direct investment – and lots of it. And tourism is seen as a good way of attracting investment, into all sorts of sectors. Damir Novinic, the managing director of Aik-Invest, told euronews: “Over the past six to nine months, since Croatia joined the EU, several European companies, mainly from neighboring countries, have decided to make new greenfield investments in Croatia. What we still have to do – and this is a big task ahead of us – is reform the public sector so that we can make our tax environment more predictable in the long run.”

By joining the EU Croatia has seven times more access to European funds. This is potentially 1.5 billion euros per year, the equivalent to adding two percent to its GDP until 2020. But to qualify for these funds, the government in Zagreb must allocate one percent of GDP to co-financing projects.

Increasing competitiveness and economic growth are the main challenges facing the economy. Trade unions say thay have already done their part. Boris Feis, the Executive Secretary for Economy and Finance with the Union of Autonomous Trade Unions of Croatia, said: “During the last five years of crisis, the unions accepted a lot of flexibility. If you compare data from 2005 and 2013, general productivity in Croatia increased by 30 percent. Also, in the last three years, unit labour costs increased in Croatia by only five percent, like in Italy.”

Croatia and Greece are the only two EU member states whose economies have been steadily shrinking since 2008. In Croatia further declines are expected this year, with marginal growth forecast for 2015.

Euronews spoke to Boris Vujcic, the Governor of the Croatian National Bank, and asked him to describe his economic expectations.

Boris Vujcic: “It’s too early to see the real effects of joining the EU as you said, just 10 months afterwards. Croatia joined the EU during an unfavourable economic period, during the down swing recession of both the EU and Croatia while in other waves of the enlargement, countries joined the EU during boom periods. Also the EU structural funds are a significant thing for the newcomer to the European Union.”

euronews: “Mostly everyone points to the central bank’s policy as the only economically stabilising factor within Croatia – do you think that’s a detriment?”

Boris Vujcic: “It’s very important that the banking system is stable and well capitalised, because that gives the banking system the possibility to extend credit to the corporate sector which is needed in order to create jobs. What I think needs to be done are structural reforms in improving the business climate, i.e. deregulation of the product market, of the services market, labour market – and that will create a set up where you can see more FDIs (foreign direct investments) flowing in – not only in the financial sector but let’s say the export oriented part of the economy. However there are limits to what the monetary policy can do, as we central bankers always try to explain.”

euronews: “Do you think there is a considerable mismatch between the monetary and the fiscal policies of this country?”

Boris Vujcic: “Monetary policy was tight before the crisis, and then we loosened it during the crisis. While the fiscal policies unfortunately, were not counter cyclical. And that’s the problem. Countries have to bear in mind – and this is the lesson they have to take from this crisis – that they have to have fiscal policy in the right place in the good times, because if they don’t they won’t be able to use it in the bad times.”

euronews: “When you were doing the negotiations, did you find that the cultural changes sometimes required from your institutions were the biggest detriment, or was it the requirements being placed on you by Brussels?”

Boris Vujcic: “Of course, we did have some misunderstandings and differences in opinion with Brussels, but much more work was placed domestically explaining why some things had to change, why they had to change within certain deadlines and in the end why that is not so detrimental to a country as it may appear in the first place.”

euronews: “Do you believe you did the right thing by moving towards the European Union?”

Boris Vujcic: “Croatia didn’t have any valid alternative to joining the EU. It’s very clear that if you are a small open country on the border of the large European Union, it makes sense and I think other candidate countries have pretty much the same logic.”

euronews: “Is there any downside?”

Boris Vujcic: “It’s not like we woke up on the 1st of July of 2013 and that suddenly life got much better… no! If you look at the EU you’ll now find 28 countries in very different situations. Within the eurozone countries, as you can see, there are such huge differences between countries which have within the same EU and within the same framework of monetary policy. That tells you that actually the EU leaves a lot of things up to national sovereignty and every country has to decide what it wants to do and how it wants to look in the European Union.”

Another Balkan country, Serbia, officially began accession talks at the start of this year, and what they have to do in terms of structural reform is pretty big. Everything from economic governance to regional cooperation and reconciliation.

How Serbia and Europe see each other has become the butt of Serbian cartoonists’ wit. They point out clichés and prejudices, along with the real problems of a country which, only 15 years ago, was bombed by NATO during the Kosovo conflict.

Agreements aimed at starting negotiations for Serbia to join the EU were made last April in Brussels. Belgrade still does not recognise Kosovo’s independence, but relations with Pristina have been normalised.

Accession negotiations are divided into 35 chapters, representing areas of EU law. To date, the initial screening phase for about half of these chapters has been completed or is in progress, to be followed by the verification that necessary reforms have been implemented.

Among the chapters considered most sensitive are those that relate to judicial and fundamental rights, freedom and security, and financial control.

Michael Davenport, head of the EU Delegation in Serbia, explained: “There’s a very challenging reform of public administration and local governments administration ahead of us that’s vital to ensure Serbia has to deliver across all these chapters in the negotiation process.”

Since the economic crisis, EU Community institutions have taken a more rigorous approach to the criteria required to join the EU.

For Serbia and all other countries wanting to join, compliance with economic and financial criteria is increasingly challenging, but perhaps this is a positive development.

Branko Ruzic, the former Serbian Minister for EU integration, told euronews: “I think that from one side it has been tightened but in my opinion for Serbia and each other country in the region, it’s a good thing, because we have to be very pragmatic and see what is in our interest. So, if it is tightened, this will make us even more prepared to cope with all the challenges.”