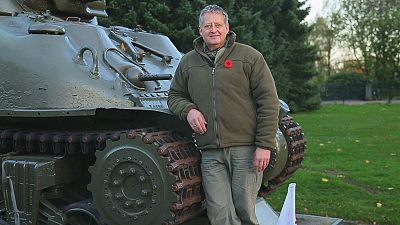 Europe is the world’s most popular tourism destination. And 40 percent of that activity is associated with cultural and historic heritage, thanks partly to several European Cultural Routes.

But how do you turn culture and history into a thriving business?

In September 1944, the Netherlands was the site of Operation Market Garden – the biggest parachute drop in history.

Seventy years on and it has become a prominent feature on the Liberation Route – a tourist route that traces the path the allies took to liberate Europe during World War II.

To better develop his client base, Bert hooked up with local hotels like Hotel Erica, in front of which is one of the many boulders which line the Liberation Route and act as information mile-stones.

Marcel Hoogenboom, who is General Manager of Hotel Erica, explained their usefulness: “For example, this summer three buses stopped, with about 60 people from different generations. And they read the stones and made use of our terraces and our restaurant.”

The business is not just about turning a profit, but is charged with sentiment. This region in particular was caught in the thick of the fighting during WWII.

Marcel Hoogenboom’s grandfather was a member of Dutch resistance. “He got betrayed and deported to Dachau concentration camp near Munich. This was my way for filling the promise to my grand mother that his memory would not be forgotten.”

There are 17 million people employed in tourism in Europe. The sector represents 10 percent of gross domestic product.

In the Netherlands several hundred small and medium-sized business derive benefit from being associated with the Liberation Route.

The Overloon Museum is the Netherlands war and resistance museum.

It is one of the many attractions on the Liberation Route that have resulted in this region attracting around one million visitors a year.

Jurriaan J. De Mol, Chairman of Liberation Route Europe, told euronews: “This number of visitors has doubled in the last 10 years. Roughly, the visitors spend between 150 and 250 euros per person per stay.”

One of the keys to the Liberation Route’s success is in attracting a younger public, fired up by well put together museums and exciting exhibits, but also the clever use of new technology.

“When you are in front of a boulder of Liberation Route Europe,” De Mol said, “use your smartphone, get connected by flash code, and then you will hear an audio track telling you what happened on this particular spot.”