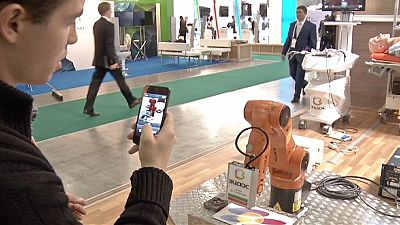 In a changing business world and tough economic times, how can innovation thrive? That was a main focus of the Moscow international “Open Innovation” Forum and Expo.

So, what is innovation leadership and what distinguishes innovators from non-innovators?

Technology expert and Professor of Innovation at the University of Texas Bob Metcalfe gave euronews his thoughts: “To me the main differentiator of innovation is learning from your customer base, so listening carefully. And that’s what we teach in our classes about how to run a company, that the most important thing is get out – get out of the building [where you work] – and go listen to your customers.”

Listening to your customers is particularly important in times of crisis amid declining demand and growing competition. After all, necessity is the mother of invention, according to Peter Lindholm, the World Bank’s advisor on innovations: “Times of crisis are also the right time for innovation. Because that’s when everyone has to survive, and those who have invested in innovation suddenly can boom when the crisis is over. If you have money, it’s really the right time to invest more in innovation, also the mental conditions are more favourable – because when you are a happy ‘fat cat’ you usually don’t try to look at innovation, but when you have to survive, you have to find solutions.”

So what about Russia? Addressing the forum, Russian Prime Minister Dmitry Medvedev said the Kremlin is committed to supporting innovation and research.

But many Russians say they are not seeing the benefits, despite major investment.

Between 2001 and 2010 annual government spending on science projects grew tenfold to the equivalent of 5.4 billion euros.

But in a survey earlier this year, almost 60 percent of Russians were were questioned said they had seen no change in public spending efficiency.

Oleg Fomichev, the Russian Deputy Minister of Economic Development, told Euronews: “It’s true that it could be more difficult for the country to develop innovation when it has a permanent source of money from exportation of oil and gas, but it doesn’t mean that we will not have innovation. First, the commodity sector itself now needs innovation much more than it ever has before, and also there are [in Russia] a lot of sectors that are not connected with oil and gas production and which work directly in the global markets. I mean the IT sector, which has shown double-digit annual growth in the last couple of years.”

Twenty years ago – in the economic slowdown of the early 1990s – the IT sector and innovation transformed Finland’s economy from resource-based heavy industries to knowledge-based information and communications companies, helped by increasing government spending on education, R&D and innovative business clusters.

Recently Finnish icon Nokia lost its independence and many jobs, with the purchase of its mobile phone business by Microsoft.

But Pekka Soini, who is the head of Finland’s Funding Agency for Technology and Innovation – Tekes – sees opportunities, not just for the company but also for Finland itself.

He told us: “Nokia has reduced a lot of R&D people in Finland and also the eco-system around Nokia. But those people, maybe 10,000 of them are now getting into something new, creating their own companies, bringing their ICT (information and communications technology) capabilities and competencies to other industries. So, I see that as a big opportunity for again the transformation of Finland to something new.”

Reporter Natalia Marshalkovich in Moscow for euronews concluded: “In tough economic times, spending on innovation by businesses, and governments, is not just necessary, but the best way to survive and keep ahead competitors. As Microsoft’s founder Bill Gates famously said – ‘innovate or die’.”