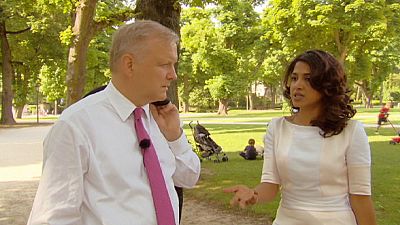 Real Economy kicks off a discussion on Europe’s strategy beyond pure austerity, with its first episode on Growth in the European Union.

The show analyses the paths taken till now and where the focus is shifting for policy makers and the private sector. Real Economy puts these measures and potential paths for European growth in the context of Europe’s citizens.

Featuring the EU Commissioner for Economic and Monetary Affairs & the Euro, Olli Rehn, as a special guest of Episode 1, Real Economy’s presenter Maithreyi Seetharaman delves into the tough question of whether the economic model followed by Europe needs a drastic overhaul.

Rehn answers pointed questions about the EU’s crisis measures and the need for coordinated action by European institutions, which he says can be lacking. Rehn tells Seetharaman that if he had more influence over the ECB, his answers would be even more honest and forthright and believes more must be done to increase the credit lines to SMEs in Southern Europe via the EIB and the ECB. This, he says, will be the path to growth and employment.

The show also puts the question of whether the EU needs an economy modelled on the lines of the Nordic countries to Sweden’s Finance Minister Anders Borg and Ericsson’s Chairman Leif Johansson. Show producer Sebastien Le Belzic visits Kista and analyses why R&D investments like those in Sweden may be the future of economic growth for Europe.

Belzic also visits a private sector initiative in Porto, Portugal, partly funded by the EU, to see whether growth can be achieved by small projects focusing on high end technologies in a cluster environment. Belzic analyses the impact of this cluster within the macroeconomic picture of Portugal.