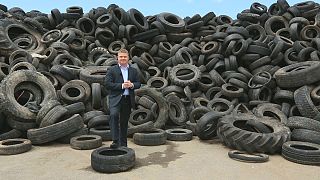 Eco-innovation is a real opportunity for entrepreneurs. Eco-businesses employ a total of 3.4 million people across Europe.

This week, Business Planet takes a trip to Croatia for a closer look at a very specific kind of innovation: noise barriers.

The noise barriers being built along the motorway near Zagreb are spearheading innovation. They are 40 percent made of recycled tyres and are among the most efficient on the market.

They are the result of a project launched in 2009 as part of the European Eco-Innovation programme.

One of the companies involved in their production is an SME (small and medium sized enterprises) which recycles tyres, turning them into a powder used to build the barriers. It’s a great opportunity for innovation, according to the company’s chairman.

“If we achieve the goals that were set, we’re hoping to hire up to 30 people and double our production capacity,” said Damir Kirić, the chairman of Gumiimpex.

The powder is mixed with cement at another factory, where the noise barriers are moulded.

Here, too, it is hoped the project will help hire an extra 60 people.

It is a serious investment. Danica Jelenić put in 355,000 euros. She is delighted with the result.

“Taking part in this project has really strengthened our position. We’re taken seriously by other players on the market,” she enthused.

The European Eco-Innovation programme gives access to subsidies to launch a project. So far, it has backed 200 projects throughout Europe.

The noise barrier project was born at Zagreb University. It is the brainchild of Professor Stjepan Lakušić.

Half of the project was funded by the Eco-Innovation programme, which provided 500,000 euros.

Now, the plan is to sell this innovative technology to neighbouring countries, where there is always a need for fresh ideas on how to recycle tyres.

This new technology has already attracted a number of potential buyers attracted by the low production cost.

“Using recycled products brings down the cost by 10 to 18 percent compared to similar products on the market,” Stjepan Lakušić told euronews.

The chairman of Gumiimpex, Damir Kirić, described his recipe for success: “For me, the keys to success are – developing products from recycled material, human investment and new technologies.”