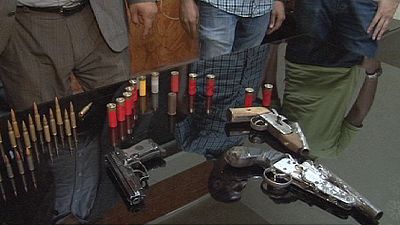 Cairo in the daytime is mostly only dangerous for its crazy traffic and choking pollution, even if a lack of law and order since last year’s revolution weighs heavily on Egypt.

But when night falls and Cairo’s Nile riverbanks offer starlit walks, the city’s darker heart in poor districts – like Chobra al-Khaima or Imbaba – begins beating. Fear and crime walks these streets and the rule of law is paper-thin, or non-existent.

This is General Bilal Labib’s patch. He must send his men into harm’s way daily to try and check the flow of all things smuggled or stolen, and the criminals behind it all. But now the police face a new, and deadlier challenge.

“After the Arab revolutions we noticed large quantities of weapons coming over our borders from Libya and our other neighbours. But now we are starting to capture medium-range missiles, which we haven’t seen in Egypt before,” said Labib.

The latest events in Sinai, which cost the lives of many Egyptian soldiers, confirms that Egyptian armed groups and smugglers are working together, and turning their weapons on the Egyptian army.

The police prepare to move out at 3.30 in the morning, when it is hoped most of their targets will be tucked up in bed.

More than 50 well-equipped soldiers speed off in several waves of cars, their sirens quiet. Tonight’s swoop is following a precise tip-off locating the home of a suspected arms trafficker.

Top of the police’s search list are weapons and drugs. Night raids are preferred, to allow fast in-out operations.

But they are often expected, and some criminals have their getaways already planned.

This time the police have missed a big fish, who made it clean away.

“In this unit we lead the raids against organised crime and wanted suspects,” says the Assistant Chief of the al-Qaliubiya security post, General Achraf Zakharem.

His operation came to an end only after a raid went through three houses belonging to arms traffickers.

After a long night the operation was completed at 6.00 in the morning. The police have their night’s haul; a few suspected arms traffickers with some locally-made handguns, a revolver, and some ammunition.

Ahmed Ragab and his fellow officers are happy, for now.