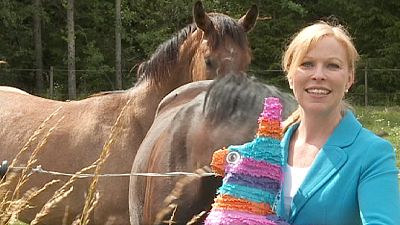 Sweden is one of the top three most innovative countries in the world, along with Switzerland and Singapore.

Marika Bonde made her dream come true. Three years ago, with her partner Tomas, this 45-year-old ex-flight attendant set up her own company, an internet site selling party novelties. Marika discovered a new novelty from South America; piniatas. Her turnover so far this year is 500,000 euros, up 20% from 2011. And she is planning to take on her first employee. She lives in the Swedish countryside, far from the hustle and bustle of the city.

Marika’s business was born thanks to e-factory, a project led by the Uppsala region between 2008 and 2010, which won a European Enterprise Promotion Award from the European Comission, having helped create 200 e-commerce companies like Marika’s. Half of them are still operating. For Marika, e-factory especially helped with setting up the website.

Marika Bonde said: “The e-factory helped us to believe in ourselves as entrepreneurs. And they believed in our project. They also helped us to fund our business. They connected us to the right people who could help us with e-commerce, because we didn’t have any experience at all of the internet.”

Today Marika still works with the former e-factory project manager. Leo Padazakos is a Greek entrepreneur who has lived in Sweden for eight years. He has a real passion for enterprise in rural zones and works on other ways of boosting this type of business. He said: “Another way we help businesses is financing them through crowd funding. Which means that a lot of people invest small amounts of money to finance their local companies.”

Marika Bonde said: “Our keys to success are believing in your idea, never giving up, and finding a good partner.”