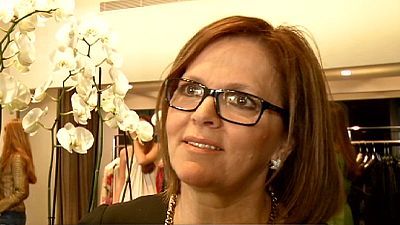 In Porto in Portugal, unemployment is a record 14%, and the new austerity measures are biting hard. The economic crisis is depressing, but Euronews met one woman entrepreneur who is fighting to stay afloat.

Fatima Mendes has followed her passion for fashion. After a successful career teaching art, 30 years ago she opened her first shop, and became one of the first to import international luxury ready to wear brands into Portugal. Today she has 6 shops, employing 20 people. The latest one opened last winter in Porto. The economic crisis didn’t make Fatima pause for a second.

She said: “It’s true, perhaps it was a bit mad! Lots of people thought it wasn’t the right time. But for me it was! You have to arm yourself with lots of courage, take the next step, to beat the crisis. You have to get out there!”

With turnover of six million euros, up 5% in 2011, Fatima likes to share her success by advising others entrepreneurs. That’s why she’s one of 300 official ambassadors for women entrepreneurs in Europe.

Mendes said: “You need know-how. You need to be humble, behave like colleagues, friends, be united. I think being united is vital for really good work.”

Sofia, Fatima’s daughter and now her right hand woman, agrees. “I have to be determined, and always respect other people’s ideas. I respect my own work, and the work done by me team. This way, we can always achieve our aims in a very serious way, but we remain solid over time,” she said.

And this summer, Fatima is planning to open a new boutique for children, managed by her other daughter Teresa, who is just about to join the company.

Fatima says that the keys to success are enthusiasm, creativity, work, humility and a bit of curiosity.

The European Network of Female Entrepreneurship Ambassadors has more than 300 members.

The European Network of Mentors for Women Entrepreneurs is active in 17 European countries.

The main event of the 2012 European SME Week on 17 October will focus on women entrepreneurs.

Women of all ages who are interested in starting up a company can participate in the Erasmus for Young Entrepreneurs exchange programme.