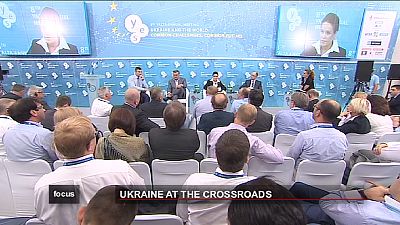 This is a crucial year for Ukraine and especially for its international relations with both Russia and Europe.

That was the backdrop to this year’s privately organised Yalta Conference in the southern region of Crimea.

The meeting was held in the Grand Livadia Palace, where in 1945 Roosevelt, Churchill and Stalin thrashed out the future of post-war Europe.

This year’s agenda was not quite as historic, but there was, and remains, much at stake for Ukraine. An agreement on free trade with the EU is in sight, with full membership as the long-term aim.

But events are being overshadowed by the imprisonment and trial of former Prime Minister Yulia Tymoshenko.

Srefan Fuele, the EU Commissioner for European Neighbourhood Policy, said they are negotiating an association agreement, but that progress will be dependent on Ukraine delivering on “fundamental rights and freedoms, including the court room.”

Tymoshenko is on trial for signing gas agreements with Russia in 2009, which the new government says she had no authority to do without parliamentary approval.

The new government’s demand that the agreements be revised, has again brought them into confrontation with Russia, but Ukraine’s President Vikor Yanukovych, says his country’s decisions are not driven by emotion: “We remain strategic partners with Russia.”

Former finance minister and Speaker of the Ukrainian Parliament, Arseniy Yatsenyuk, who is now in opposition, considers that Ukrainian politicians have failed to use convincing enough arguments in their dealings with Russia, especially over gas.

Russia chose not to go to Yalta, opting instead to hold a forum of its own. There, an agreement on the South Stream gas pipeline was signed. It is aimed at delivering gas to Europe, by-passing Ukraine, as does the North Stream route.

Europeans advise the answer for Ukraine is to reduce its dependence on gas.

Carl Bildt, the Sweden’s Minister for Foreign Affairs said: “The future of Ukraine, as with many other European economies is in production, trade, tourism, transport, some gas as well, but not the enormous dependence that we have now.”

Ukraine seems to be torn between its European ambition, based on its strategic location on the one hand, and the energy dependence and accusations of political persecution on the other. Whether the country can catch the wave of efficient reforms and keep the balance on the road to democracy – remains to be seen.