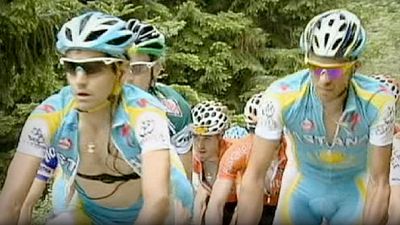 July 2, 2011 is D-Day for the Tour de France and Team Astana finalised its preparation for the world’s most prestigious cycling event with an impressive third place finish in this year’s edition of the Critérium du Dauphiné.

The Kazakh side is full of hope going into the competition and, after its past glory, the sky blue team wants to shine again.

Courage and tenacity in past events has made the team what it is today.

Sporting Director Laurenzo Lapage explained cycling is not just a sporting discipline for its riders, but a way of life: ‘‘We don’t have any pressure from a sponsor as we are not selling anything or advertising a brand. But on the other hand, this is a very proud team. It’s something special. And also when you are in this team - even if you are from Belgium - after a few months, you start to feel as though you belong to Kazakhstan.’‘

The team’s Commercial Director, Aidar Makhmetov, said they have never lost sight of their main objectives: “Promoting the country and developing cycling in Kazakhstan. We know this is the biggest competition and I think that if we win, we will gain the interest of not only the people in Kazakhstan, but also those from other countries.’‘

Astana credits team spirit as a big factor in its quest to achieve victory on the Champs Elysées on July 24.

“We have to be realistic. Maybe it will be difficult to win the Tour de France in the individual overall contest, but as a team it could be possible. I think we can achieve this using our full team,’‘ says Aidar Makhmetov.

The team believes the secret behind its success is solidarity, with any member willing to sacrifice himself for the sake of a teammate and give his all to help Team Leader Alexandre Vinokourov, who has the reputation of a warrior.

‘‘I always like to attack in a race. I never give up and I’ll fight to win in any situation if I’ve got the strength in my legs and even at times when I haven’t. I will always try and it brings rewards,” Vinokourov enthused.’

Vinokourov, who is also known as ‘Vino’, says he will enter his last Tour de France with the same determination he had for his first race. Experience counts for everything in a sport like cycling but age does not allow for any error.

Cycling legend Vinokourov leaves nothing to chance. His sole focus is on winning and when he attacks he doesn’t need to look over his shoulder to see the effect he has had on the other riders. He says his next task is to prepare the way for future generations.

“Another one of my goals is to focus on the young riders from Kazakhstan who are joining the team. I hope we’ll be able to find another Vinokourov in the next few years or maybe someone even better,’‘ he said.

Having prepared his goodbyes and Vinokourov wants to give Astana a third consecutive Tour de France victory.